Tsuneishi Shipbuilding Co., Ltd. (Head office: Hiroshima Prefecture, Japan) has brought to market the TESS64 AEROLINE, a D/W 63,700mt type Bulk Carrier that is equipped with the new AEROLINE technology to reduce wind resistance. While nearly covering the navigation patterns of the TESS58 vessels, which are the largest in the TESS : Tsuneishi Economical Standard Ship, HANDYMAX Series of over 300 ships built so far, this new model is 10 meters longer, which enables a boost in deadweight to the 60,000-ton class for improved transport efficiency. Sales of these new ships have begun, as Tsuneishi Shipbuilding’s first D/W 63,700mt type Bulk Carrier that were developed with environmental friendly shallow draft. 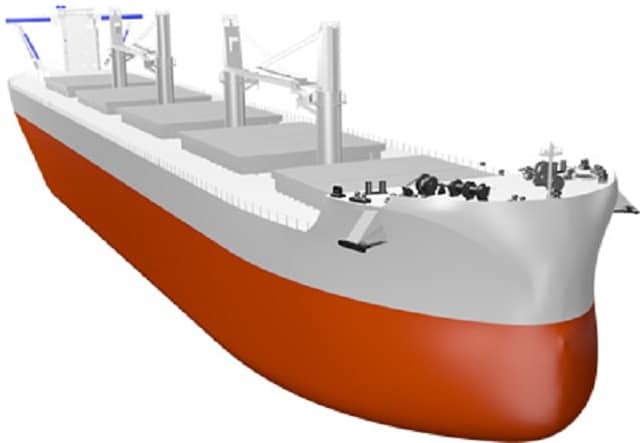 Designed for low fuel consumption, the TESS64 AEROLINE is equipped not only with this new AEROLINE technology but also with the newly developed TOP-GR (Tsuneishi Optimized Propulsive Gear) propellers for lower vibration and higher propulsion efficiency, and FAIS (Fresh Air Intake System) which boosts the engine’s fuel efficiency through direct intake of cool outside air. In developing a hull shape, which is blunt but low resistance, fuel efficiency was raised by incorporating the proprietary energy-savings technologies and electronic controlled engine, and was resulted in 20 % increase of the fuel efficiency compared to conventional TESS58 models.

Moreover, the TESS64 AEROLINE design was most emphasized on the performance under actual sea conditions (actual operating speed at full load draft). While being in good fuel-efficiency at full load draft, the TESS64 AEROLINE also has a shallow draft design to meet port restrictions, and being able to carry even more cargo loads, thereby boosting transport ability of 79,000 ㎥ and increasing the efficiency for cargo loads.

Tsuneishi Shipbuilding Co., Ltd. has expanded its lineup with this debut of the TESS64 AEROLINE in order to meet to the customer’s severe needs, and is seeking new growth in orders.