There were many friends, partners and representatives of the buyer present at the launching ceremony, while Mrs. Ann Krafft, the wife of the owner of the company Mr. Mikael Krafft, broke a bottle of champagne over the bow and symbolically launched the ship into the sea.

This is the realization of my boyhood dream when I sailed in the Baltic Sea. It is not easy to build such a boat and it is very exciting to see that in today’s time the sailing vessels not possible 100 years ago, are being made – said Mikael Krafft, founder, and owner of a Monaco-based company that has three sailboats in its fleet.

162 meters long and 18.5 meters wide, with a deadweight of 2000 tons will have five masts and sails with the overall surface of 6.347 square meters. The type of clipper sailing boat with such sail-plan is called Bark. Flying Clipper has five decks, with accommodation for 450 persons, 300 passengers in 150 luxury cabins, and 74 crew cabins for 150 crew members. 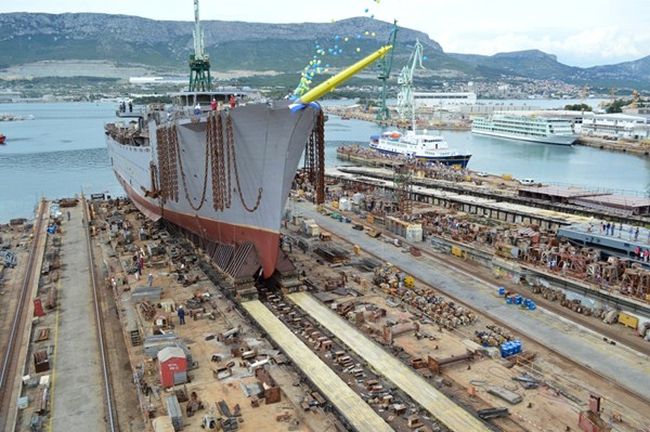 – I am grateful for the opportunity to build such a sophisticated ship. There is a lot of equipment in the sailing boat and I’m proud of its design, quality, the number of new systems, and the effort of our hardworking shipyard workers. With this project we opened up new opportunities for construction of cruise ships – said Tomislav Debeljak, CEO of Brodosplit, adding that the Split shipyard is in pre-contractual phase with few global companies.

The Croatian Bank for Reconstruction and Development (HBOR) recognized the value of this highly sophisticated project and supported Brodosplit by issuing an insurance policy thus taking over the risk of repayment of one part of the loan, while Brodosplit proved its competitiveness in building such a unique ship which includes design, construction and equipping with sophisticated equipment and luxury interior.

– I am very delighted that HBOR supported this valuable project and proved once again that the support of state bank for development and export is essential in the realisation of successful export business. The export is the mirror of the national economy and it is in our best interest to achieve the best results in that area, “said Tamara Perko, president of the HBOR Board.

It will be decorated in a luxury-style, but with style and atmosphere reminding of old sailing boats, there will be a library, large salons, one of which will extend over three decks with rails and piano. The most state of the art navigation and communication equipment will be installed on the clipper, each cabin will have Internet access, telephone, television, music, and other entertainment facilities, the entire ship will be covered with Wi-Fi signal. There will be three bars on the open decks and galley extending over three decks. Air conditioning on the ship will be executed in accordance with high-quality standards in order to satisfy the comfort of passengers in all climate conditions.

A marine platform that will be at the stern will be equipped with the mechanism for opening and lowering the sea level so that the passengers will have the direct sea access. The ship has steel construction while the deck will be fully covered by the highest quality teak.

Three swimming pools with fresh or sea water and underwater lights, heating, and bubbles are planned on the ship as well. One of the pools could be used for diving, 50 cubic meters of water will be the volume of the largest swimming pool.

The added value of the boat are sails, which, besides the crew, can be managed by the passengers themselves, which is the originality of the Star Clippers fleet of ships. Although it will have two fully independent electric propulsion engines, the boat is primarily intended for sailing and over 80% of the operation is carried out in sailing.

– On this day, Brodosplit is a very proud constructor because the abovementioned hull is one of the pioneers in positioning Brodosplit in the niche of high-quality passenger ships tailored to customer’s needs, said Teuta Duletic, Sales Director of Brodosplit.

It will have the Safe Return to Port system that is installed in Croatia for the first time. This is a novelty in Croatian market and there have been new standards for increased safety of passenger ships, passengers and crew since 2010. This system actually means that all key equipment on the ship will be duplicated therefore there will be two engine rooms built with all electric energy and water supply plants and all fuel and oil systems with the additional bridge. Everything will be literally doubled on the ship so that in the case of any defect, fire or flooding of any space or zone on the ship, the ship will be able to return safely to port from the distance of almost 2000 NM which is the farthest point from land to sea.

It is planned that the ship will be able to sail in all seas of the world, even in the Arctic and Antarctic regions so it will be built to comply with Ice Class Requirements. The ship’s speed with the sails will be about 16 knots, and it is envisaged that it will be able to navigate up to 20 knots under the favorable weather conditions and operated by the capable crew. It will navigate at 16 knots of speed powered by its two engines, it will have pitch propellers, bow thruster and two rudders enabling it with extreme maneuvering abilities. There will be four lifeboats that will be used as tender boats for transport of passengers to smaller ports or beaches, eight rafts, four sports boats and two smaller boats.

MAN Cryo Becomes First Supplier To Develop A Marine, Liquid-Hydrogen Fuel-Gas System
Want to share your tips and advice? Got questions? Visit the community forum to ask questions, get answers, meet people, and share your tips!