Brittany Ferries has today signed a letter of intent with the Flensburger Schiffbau shipyard in Germany to construct a new ship powered by LNG.

It will be one of the cleanest, most environmentally-friendly ships to operate in UK waters because LNG emits less carbon dioxide during combustion than marine fuel oil and burns with no smoke. In addition it is free of sulphur and is very low in nitrogen oxide emissions. 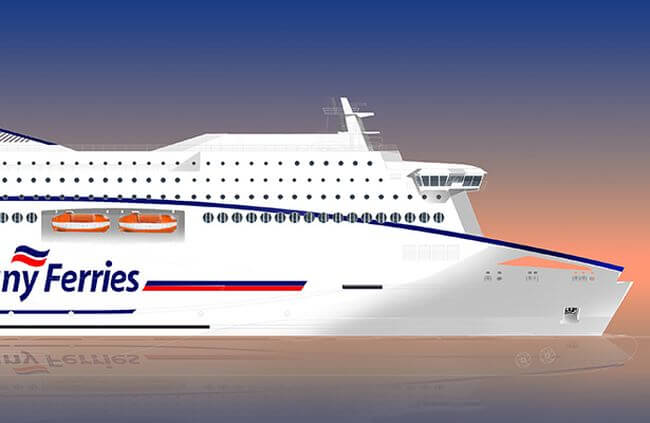 Christophe Mathieu, CEO, Brittany Ferries said: “The signing of this letter of intent with the Flensburger shipyard is a concrete step towards the construction of a new generation of Brittany Ferries ships. Despite Brexit, we remain confident in our ability to continue to grow and modernise our route network, serving both tourism and trade in the regions of western Europe.”

More than four in five people travelling on the French company’s ships are British and more than 2.4 million passengers were carried in 2016. A final contract for the 1,680 passenger and 257 cabin vessel is expected to be signed in spring 2017, following which construction will start.

The new ship is expected to launch in 2019 on the Portsmouth­-Caen route which offers three daily return sailings. It will operate in tandem with popular cruise ferry, Mont St Michel, launched in 2002.

Today’s announcement re-states Brittany Ferries’ commitment to reduce the environmental impact of its operations by embracing new technologies. It follows the completion of a £65 million investment in emission-reducing ‘scrubber’ systems which have been retrospectively fitted to six cruise ferries in the company’s ten-ship fleet.