You are here: Home › Shipping News › Britain’s Biggest Ever Warship HMS Queen Elizabeth Takes to The Water for The First Time
TwitterFacebookLinkedInPinterestBuffer

Britain’s biggest ever warship HMS Queen Elizabeth took to the water for the first time on 17th July as she was moved out of dry dock.

With just two metres to spare at either side of the 65,000-tonne aircraft carrier, a flotilla of tugs inched the ship from the dock where she was constructed at Rosyth, near Edinburgh, to a neighbouring jetty where she’ll be completed over the next two years.

After a two-day operation to flood the cavernous dry dock, tugs began the delicate task of moving the leviathan in her entirety for the first time at dawn.

It took just three hours to complete the ‘float out’ – an operation which took place 13 days after Her Majesty the Queen officially named the vessel in a spectacular ceremony. 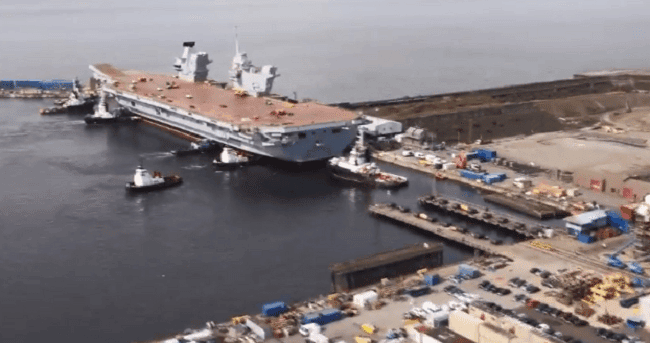 Director ship acquisition is pleased to inform you that HMS Queen Elizabeth is afloat and wef 170630z Jul 14 clear of one dock.

Members of the carrier’s 100-strong crew say watching this morning’s move truly brought home the size of the ship.

“It’s great to see the future flagship of the Navy afloat for the first time – and one step closer to her natural habitat,” said LET(WE) Tom Handley.

“For a brief period all the connections needed to build her have been removed and so you can get a real feel for the character and look of the ship for probably the first time.”

Teams will now continue to outfit the ship and bring her systems to life in preparation for sea trials in 2016.

The dock she vacates will be used for final assembly of her sister ship, HMS Prince of Wales, which will begin in September.

Both ships are being built by the Aircraft Carrier Alliance, a unique partnership between the Ministry of Defence, BAE Systems, Babcock and Thales.