Today the Brave Tern, a vessel used for the installation of wind turbines at sea, dominated the Rotterdam skyline. The 132 meter long ship was jacked up to a height of about seventy meters to test its extended legs.

The Brave Tern is owned by Norwegian Fred. Olsen Windcarrier. The vessel has four so called jacking legs with which she can position herself firmly on the seabed. The four legs of the Brave Tern are extended with fourteen meter each up to 92,4 meters during recent weeks in Rotterdam. 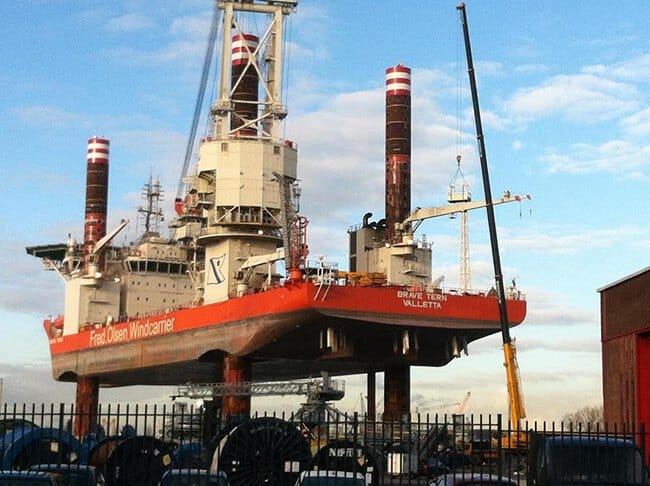 Also the frame and the boom of the ship’s crane are extended, in total with twenty meters. The crane is now capable to lift up to 120 meter above the deck of the Brave Tern. The modifications of the 2012 build Brave Tern are necessary because wind turbines becomemore heavy and the blades of the rotor blades becomes larger. Also wind farm are installed in deep water more often. Sister vessel Bold Tern will get the same upgrade later this year.

The Brave Tern is now capable of carrying four complete ‘multi megawatt’ turbines, including towers and rotor blades. The vessel can operate in water depths up to sixty meters.

Franklin Offshore Europe, press release February 23 2016, page 2 of 2 The Brave Tern will first do a maintenance job at the North Sea, before heading to the US east coast where it will assist in the construction of the first US offshore wind farm.

Franklin Offshore Europe in Rotterdam is  a world leading service provider for the offshore industry. The company is part of Singapore headquartered Franklin Offshore with offices in Australia, Indonesia, South Korea, Azerbaijan, Qatar and the USA