Opened in August, it consists of twenty-seven iron containers stacked Lego-like into three floors of stores ranging from a green grocer, al fresco coffee houses and a Philadelphia-style grill house, to a toddler-wear boutique and bicycle rental shop.

Retail expansion in South Africa, especially in the small business sector, has plateaued along with the wider economy, while consumer confidence recently dropped to a 14-year low, intensifying the battle for people’s wallets.

27 Boxes is an innovative attempt to find a new avenue of growth for small traders. 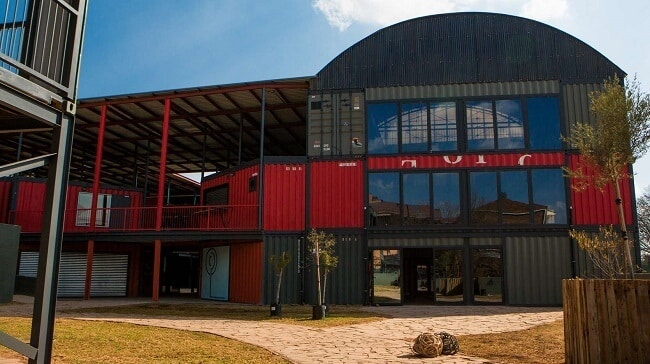 “We are in that space between market and mall,” said owner and property developer Paul Lapham, whose company is also behind a 280-room apartment block in Johannesburg’s city centre built from second-hand cargo containers.

The aim is to tap into two retail trends in South Africa, which ranks sixth in the world by number of shopping malls.

On the one hand, economic growth is subdued and cash-strapped consumers are looking to make their money go further. That means retailers need to cut down on overheads to help them offer low prices.

On the other, an expanding middle class is looking for new retail experiences beyond the replica mega-malls springing up across the country.

Moving to 27 Boxes is a step up for clothes retailer Michelle Arries, who used to sell African couture at pop-up stores in the street markets that have mushroomed across South African cities in the last decade.

“We wanted to come to a semi-formal setting. And this space is particularly for the person who wants something different,” said Arries, who has fashioned a fitting room into the middle of the narrow space by setting up arcs of thick linen curtain.

Using containers enabled Lapham to cut the typical 18-month construction period for a bricks-and-mortar mall by about half.

“It’s very affordable and creates a visually interesting look and feel,” he said.

Kevin Jaques, manager for Maersk’s Southern Africa sales team, said the firm had so far this year around 1,200 of the 4,500 shipping containers currently available in South Africa. A single box sells for between $700 and $1,200.

“They’re like flexible building blocks and you can pretty much do anything you imagine. You can build hotels, hospitals, anything, because they’re modular and can take up 100 megatons of pressure,” said Jaques.

(By Mfuneko Toyana, Editing by James Macharia and Mark Potter)