LOCKPORT, La., Bollinger Shipyards has delivered the USCGC BENJAMIN DAILEY, the 23rd Fast Response Cutter (FRC) to the U.S. Coast Guard. The Coast Guard took delivery on April 20, 2017 in Key West, Florida and the vessel’s commissioning is scheduled for July 4, 2017 in Pascagoula, MS.

“We are pleased to announcethe delivery of the latest FRC, the USCGC BENJAMIN DAILEY,” said Ben Bordelon, Bollinger President & C.E.O. “This FRC built by Bollinger Shipyards will be stationed in Pascagoula, MS. FRCs already in commission stationed in the mid-Atlantic and the South Eastern U.S. have seized multiple tons of narcotics, interdicted thousands of illegal aliens and saved many lives. In just one case, on February 28, 2017 the Coast Guard announced that the Coast Guard Cutter JOSEPH NAPIER, a Bollinger built FRC, had seized 4.2 tons of cocaine in international waters north of Paramaribo, Suriname, in the Atlantic Ocean. The FRC program is a model program for government acquisition and has surpassed all historical quality benchmarks for vessels of this type and complexity. The results are the delivery of truly extraordinary Coast Guard cutters that will serve our Nation for decades to come. We are extremely proud that the Fast Response Cutters built locally on the bayou by Louisiana craftsmen are having such a major impact on our nation’s security. We at Bollinger Shipyards are looking forward to hearing of the heroic exploits of the USCGC BENJAMIN DAILEY as it joins the Coast Guard’s operational fleet.” 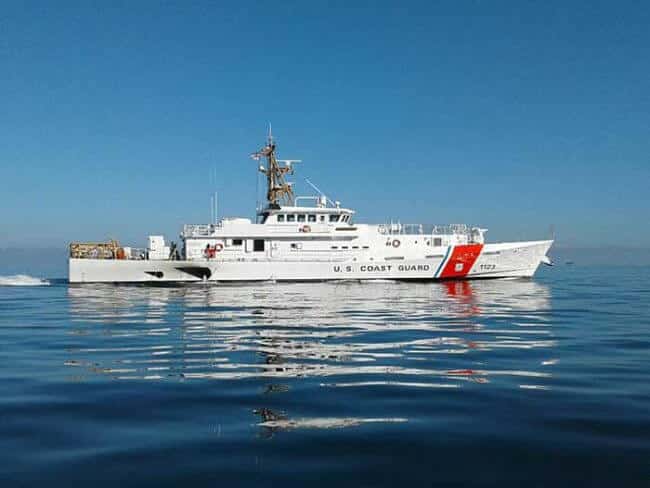 The 154 foot patrol craft USCGC BENJAMIN DAILEY is the 23rd vessel in the Coast Guard’s Sentinel-class FRC program. The FRC has been described as an operational “game changer,” by senior Coast Guard officials. This will be the first FRC to be stationed in the 8th Coast Guard District in Pascagoula, MS. Previous cutters have been stationed in Florida, San Juan, PR, Cape May, NJ and Ketchikan, AK. To build the FRC, Bollinger used a proven, in-service parent craft design based on the Damen Stan Patrol Boat 4708. It has a flank speed of 28 knots, state of the art command, control, communications and computer technology, and a stern launch system for the vessel’s 26 foot cutter boat.

Each FRC is named for an enlisted Coast Guard hero who distinguished him or herself in the line of duty. This vessel is named after Coast Guard Hero Benjamin Dailey. Dailey, Keeper of the Cape Hatteras Life-Saving Station, was awarded the Gold Lifesaving Medal on April 24, 1885 for his exceptional bravery in one of the most daring rescues by the Life-Saving Service.

Bollinger Shipyards LLC (www.bollingershipyards.com) is a leading designer and builder of fast military patrol boats, ocean-going double hull barges, offshore oil field support vessels, tug boats, rigs, liftboats, inland waterways push boats, barges, and other steel and aluminum products from its new construction shipyards. Bollinger has 10 shipyards and all are strategically located throughout Louisiana with direct access to the Gulf of Mexico, Mississippi River and the Intracoastal Waterway. Bollinger is the largest vessel repair company in the Gulf of Mexico region.