BMT Nigel Gee, the leading independent naval architecture and marine engineering design consultancy, is proud to announce the delivery of Sure Diamond, which is the first ever UK flagged vessel to be certified under the Interim Code for High Speed Offshore Service Craft (HS-OSC). The vessel is a 26m StratCAT build by Strategic Marine in Vietnam.

Under the new code which was released by the Maritime and Coastguard Agency (MCA) in September, the vessel can carry up to 12 passengers and a further 12 offshore personnel in addition to the ship’s crew. The vessel also has a certificate of compliance with the new German Code for Offshore Service Craft which was released in December 2014. 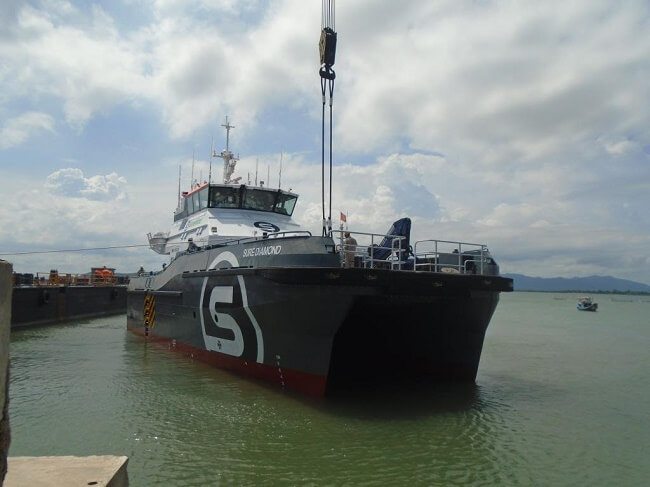 The vessel is powered by MAN D2862 Engines with a Servogear Controllable Pitch propulsion system offering excellent fuel efficiency and exceptional bollard pull capabilities. A second StratCAT 26 vessel, Sure Dynamic has completed sea trials in Vietnam and is being shipped to the UK along with a further 24 technician Quad IPS StratCAT 26 for Opielok Offshore Carriers , both vessels are designed by BMT and built by Strategic Marine.

Ed Dudson, Technical Director of BMT Nigel Gee comments: “Delivering a vessel that can carry more than 12 technicians is a huge achievement and we’d like to thank the MCA, the National Workboat Association and of course, BG Verkehr for all of their hard work in developing the new code which enabled this to happen.”