You are here: Home › Shipping News › BIMCO: Will The Dry Bulk Industry Become Profitable In 2018?
TwitterFacebookLinkedInPinterestBuffer

It looks like 2018 will be a year that shipowners should take advantage of, as the dry bulk fleet is likely to grow at the slowest pace seen since 1999, and BIMCO sees global demand growth outstripping supply growth in 2018.

As the dry bulk fleet is already expected to grow at a pace that matches demand growth expected in 2019, focus must be on improving the fundamental balance ahead of that. 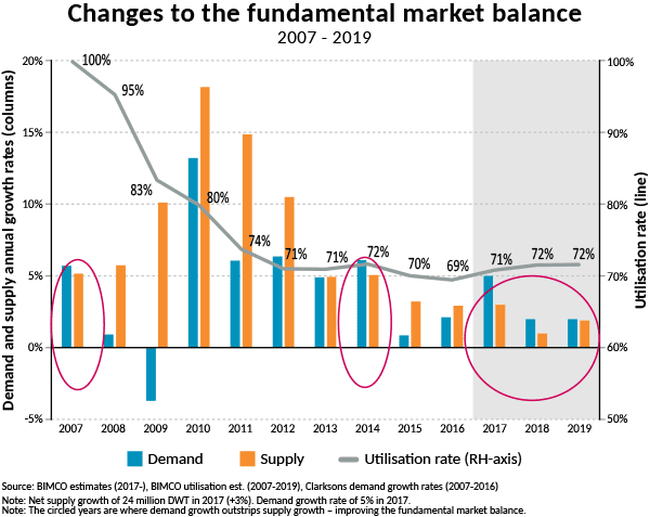 China’s imports, particularly of coal and iron ore, grew tremendously in 2017, and the second half of the year has been profitable for several bulk owners and operators. If 2018 delivers similar demand growth (+5%), the bulk industry will see profitable business for the full year.

But, be aware that 2018 may not be quite as strong as 2017, and profits may not come around until 2019, if the ongoing recovery is not handled with care

Particularly, the level of growth in the fleet and the extent of demolition of excess capacity are key factors in the 2018 market.

Unfortunately, we see weakening demolition activity, and the bulk fleet keeps growing, which can hinder market recovery. As the nominal fleet growth in 2018 is expected around 1%, focus now turns to maintaining slow steaming. If we get notably higher average ship speed the pace of recovery will slow down, if not go directly into reverse
Sand says.

The industry has got its work cut out to avoid a prolonged dip in freight rates during the first half of 2018 as volumes seasonally decline. Therefore, ship speed needs to be the main focus
Sand says.

The caveat here being that we are at the mercy of China’s appetite for dry bulk commodities. China’s economic growth remains the absolute key factor for the bulk shipping market
he says.

An unexpected market development in 2017 was China becoming even more dominant in the dry bulk sector. China grew its imports – of essentially all commodities – by a hefty margin. Most importantly, iron ore is expected to end in 2017 with a growth of 6.5% and coal surges with 19% growth. All due to a stronger than expected substitution of domestically mined ore and coal for higher quality imports of the commodities.

Demand growth in 2017 has surely been a positive surprise. Growing at almost double the pace of our initial expectations, a demand growth rate of 5% is a three-year-high
says Sand.

Some of the key reasons include, a faster substitution of China’s own low-quality iron ore towards seaborne imports of a higher quality. As well as continued strong coal imports despite the suspension of the 276-working-days limitation (a reform plan put in place to limit the number of smaller high-cost miners and cut the supply glut).

An early indication of 2018 demand growth in Chinese iron ore imports is positive, up by 3%, whereas coal is likely to remain steady.

While demand growth has improved the fundamental market conditions, the increased fleet growth has meant that the economic benefits of such a strong demand growth rate has not been fully earned
adds Sand.

The dry bulk industry is on the road to recovery and maintaining that recovery is now the key challenge.

Recovery is achieved by targeting improvements in profitability via improvement in the fundamental balance. This is done by continued demolition activity (short-term) and careful placement of new orders (long-term).

During the third quarter of 2017, freight rates turned profitable for all sizes of dry bulk ships. That means ships deployed in the spot market have been fixed at a level covering operational expenditure, and financing costs include repayment of debt. It’s the first time since 2012 that it has happened at industry average level.

The industry is clearly feeling optimistic in the wake of profitable freight rates. But rates could have gone even higher. At the start of 2017, there was only a slim improvement in the market (0.2 percentage points) as the demand growth rate (+2.2%) was forecasted to outstrip the fleet growth rate (+2%) by a small margin.