Four VLCCs have been sold for demolition since October 2016. Matching the number of VLCCs sold for demolition in the preceding two years. Most recently the 1999-built double-hull VLCC, with the framing name “Good News”, returned USD 15.5 million to the shipowner, as demolition prices have reached levels not seen since first half of 2015 (USD 400 per ltd).

BIMCO’s Chief Shipping Analyst Peter Sand says: “January struck an upbeat tone for demolition in all sectors, but the overall pace of fleet renewal, via demolition, has slowed down since then. 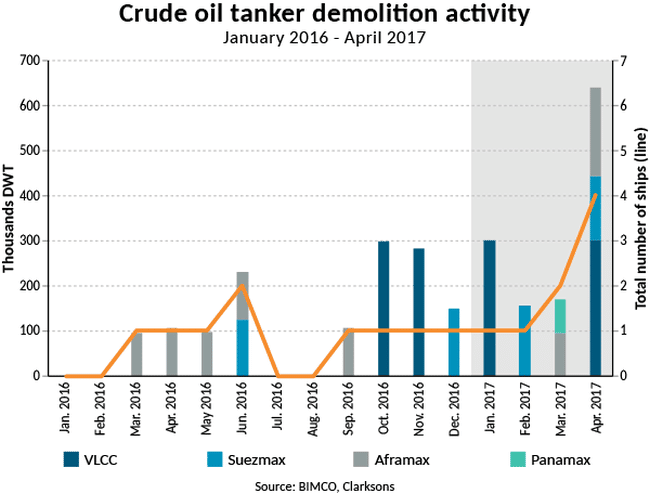 Crude oil tankers being the one exception to that as capacity removals spiked in April, reaching the highest level since February 2015.

Still a long way to go though, as net fleet growth for the large crude oil tankers are already up by 2.4% year-to-date.”

Demolition of VLCC’s off to a strong start

The first four months of 2017 have seen eight crude oil tankers form for demolition: two VLCC, two suezmax, three aframax and one panamax in total. As only nine crude oil tankers got demolished in 2016, eight sold in the first couple of months is positive. 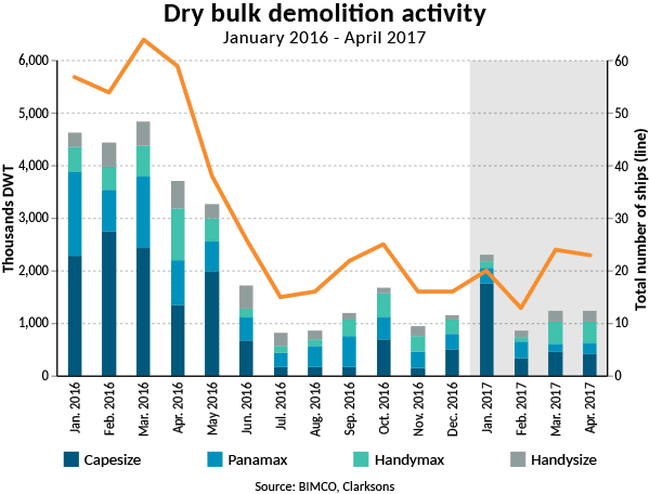 For the dry bulk sector, the Baltic Dry Index (BDI) conducts the pace of demolition at large extent. While the absolute level is still low, the improvements we have had since the market bottomed out in February 2016 is mirrored by low demolition activity since July 2016 through April 2017.

As 2017 is set to be a year where supply side growth will outpace demand side growth, much more needs to be done to the limit the looming overcapacity in the product tanker sector. 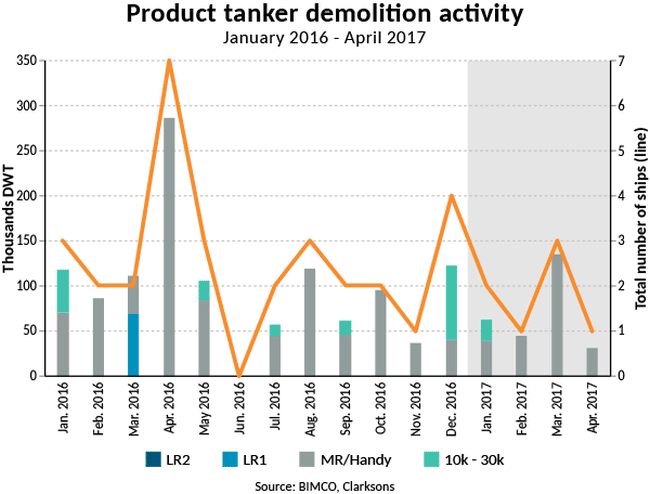 January saw the highest amount of TEU-capacity even demolished in the container shipping sector. Almost 100,000 TEU was sold off, half of which was old-Panamax ships.

The trend since then has been a clear slowdown. April was an 11-months low, as 12 ships were demolished. Out of those 12 ships, three of them were in the ‘Intermediate’ category of ships with a beam exceeding the 32.3 metres, that of a panamax ship. 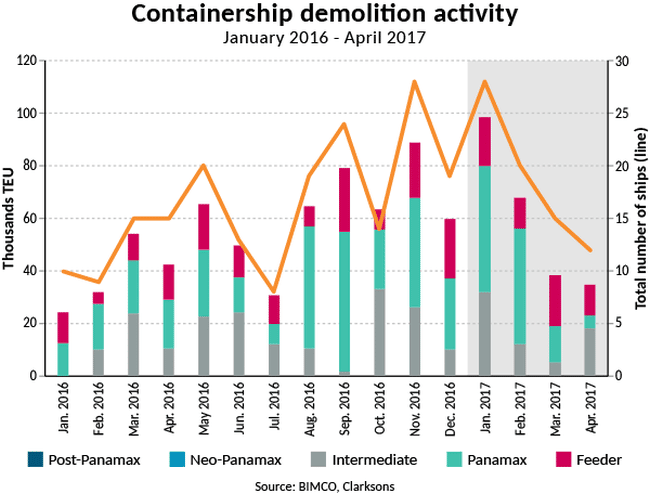 Demolition of larger ships is a new trend, as the first ship with a capacity exceeding 6,000 TEU was demolished in March 2016. The intermediate sized old-post-panamax ship that was demolished was a 1997-built 5,006 TEU container ship.

The evaporated hype is in line with the BIMCO forecast of a significantly lower level of demolished container shipping capacity in 2017 as compared to 2016, that had 654,410 TEU removed from the active fleet by demolition.