Last night in Hamburg, BIMCO President Philippe Louis-Dreyfus chose to give public recognition to all seafarers who have been – and still are – involved in rescuing people in distress at sea.

Mr Louis-Dreyfus awarded the BIMCO President’s Award to Columbia Shipmanagement Hamburg, for their “outstanding” work in rescue operations involving migrant boats in the Mediterranean. He asked Captain Horber from Columbia Shipmanagement to accept the award on behalf of their crews, but also on behalf of all seafarers who risk their lives in rescue operations.
Shipping professionals attending the event saw a video showing the events of an evening in September 2013 when a Columbia ship, the King Julius, responded to two calls to assist boats in distress in one night– bringing over 180 people to safety in a matter of hours. 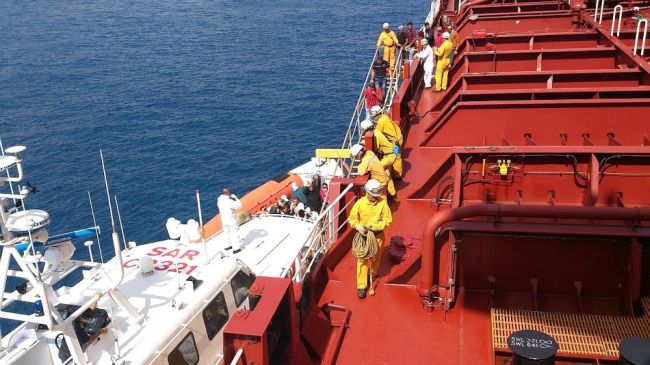 Mr Louis-Dreyfus called these events “a classic example of the outstanding work done by our seafarers.” He went on to say: “BIMCO recognises the commitment and achievement of King Julius’ crew – and by all seafarers involved in similar rescue operations. “No doubt the large number of people who have been rescued or assisted at sea during migration would also thank them if they could. Many of them owe their lives to the seamanship and skills of our seafarers.”

The winners of the BIMCO Awards 2015

BIMCO’s awards are intended to celebrate excellence in shipping. This year, they were presented at BIMCO’s Annual Conference in Hamburg on 18 November 2015. The BIMCO Education & Training Award, sponsored by Spectec, was awarded to the Institute of Chartered Shipbrokers.

The judges chose the Institute of Chartered Shipbrokers as the winner of this award because: “…it fulfils a unique role; providing global, professional shipping qualifications, holding all students to an equally high standard, but ensuring none are left behind.”

The BIMCO Contracts & Clauses Award, sponsored by Skuld was awarded to the Nordisk Defence Club.

The judges chose the Nordisk Defence Club as the winner of this award because: “For more than 80 years, it has lent its legal expertise to many major BIMCO contracts and clauses including NEWBUILDCON, BARECON, and NYPE 2015.

“As one of the BIMCO Documentary Committee’s longest serving members, Nordisk continues to demonstrate its commitment to BIMCO’s goal to develop and promote harmonised contracts and clauses for all sectors of the shipping industry.”

The BIMCO Shipping Company of the Year Award, sponsored by CCS, was won by Oldendorff Carriers.

The judges chose Oldendorff Carriers to win this award because, “…despite their challenges as one of the biggest global operators and owners in the bulk segment– serving more ports and destinations than any other – they have remained profitable during the difficulties of the current market.”

The BIMCO Regional Shipping Personality of the Year, sponsored by ClassNK, was awarded to Dr Ottmar Gast.

The judges chose Dr Gast to win the award in recognition of his work to drive Hamburg Süd to economic success. The panel noted his strong business ethics, commenting on his “application of a value-driven policy about people, the environment and doing business.”