After the Baltic Dry Index (BDI) had its seasonal weakness around the Chinese New Year in early February, stronger-than-expected demand came from across the board and lifted freight rates. This brought earnings into profitable levels for a couple of days, as the BDI passed 1,282 on 27 March 2017.

What a rebound. After the Baltic Dry Index (BDI) had its seasonal weakness around the Chinese New Year in early February, stronger-than-expected demand came from across the board and lifted freight rates. This brought earnings into profitable levels for a couple of days, as the BDI passed 1,282 on 27 March 2017. 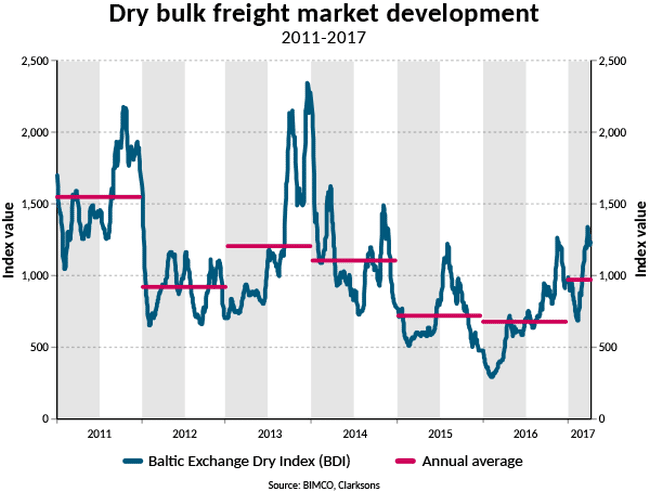 If earnings are at profitable levels now, how come BIMCO’s Road to Recovery keeps mentioning 2018 and 2019? That’s because it focuses on full year profits for all dry bulk segments. That would require a full year where the average BDI is above 1,280. Last time we had that was in 2011. Note that the BDI average for Q1-2017 was 945.

BIMCO sees the current developments as a ‘false dawn’ and reiterate expectations for 2017 as being a loss-making year for the industry as such.

As expected we had the seasonal decline in Q1-2017, but a softer landing was provided for as China’s combined imports of iron ore, coal and soybeans went up by 36.5 million tonnes (19%).

The grains shipping market seems to go from strength to strength, with soya supporting the Atlantic market. This support is set to continue, as major soya exporters like Brazil and Argentina normally increase exports in Q2.

Thermal coal imports into China are also bolstering demand. Despite the suspension of the maximum-of-276-working-days-per-year policy, domestic production could not keep up with demand during the winter season. Short coal trips into China from Australia and Indonesia make the Pacific market busy. Even though the winter is over, the suspension of the 276-working-days limitation remains in place.

As always, the iron ore exports from Brazil to China provide support that lifts the capesize market, despite the 35 valemax ships taking their share of the market. Freight rates from Tubarão in Brazil to Qingdao in China went above USD 16 per tonne by mid-March as fixtures and volumes were unseasonably high. As many as 14 fixtures from Brazil to China carrying iron ore were done in one week. That was the highest number on record since the start of 2015, according to Commodore Research.

January had more dry bulk capacity demolished than February and March combined. As the BDI moved higher, demolition activity weakened. Higher demolition prices that often follow in the wake of higher freight rates do not sufficiently tempt shipowners to sell for demolition. They either keep trading the ships themselves or sell them off in the second-hand market as asset values have climbed too.

BIMCO’s Road to Recovery, encourages shipowners to make fleet expansions via the second-hand market – and that we have certainly got. But it also builds on 0% total fleet growth, something which can only come around via more demolition. 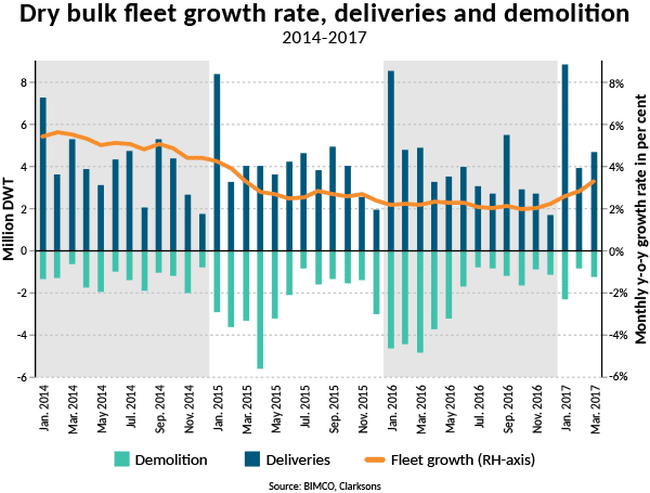 A ‘false dawn’ means that fundamental market balance improvements are happening much slower, if at all as the supply side is still growing almost as much as the poor demand growth rate.

In nominal DWT terms, the total dry bulk fleet has already grown by 1.5% or 11.7 million DWT in 2017. As the BDI moves higher, demolition activity gets weaker. And the BDI has certainly moved higher during February and March. The subsequent slowdown in demolition activity means that just 4 million DWT has been removed from the fleet so far in 2017.

In comparison, 14 million DWT was demolished during Q1-2016. It seems clear that the supply side is not assisting the “Road to Recovery”, which projects an annual fleet growth rate of 0%. BIMCO estimates that the supply side will grow by 2.3% for the full year, as newbuild deliveries will slow down and demolition is expected to pick up.

Despite the lack of short-term comfort, relief may be found in the absence of newbuild orders since the start of 2016. The record low ordering activity has continued into 2017, as orders have surfaced for only five ultramax ships, each of 63,000 DWT. This positive development has brought the total order book down to 69.5 million DWT all-inclusive – a level last seen at the end of 2004.

Another continuing trend is that of owners expanding their fleets in the second-hand market. 2017 has already surpassed last year’s monthly average of 56 second-hand sales, as Q1-2017 saw 192 deals sealed. Anecdotal evidence of owners not spending much time, if any, on pre-purchase inspections, as they fear the deal could fail, is a sign of improved sentiment across the dry bulk market. The price for a 2010-built capesize and panamax ships has gone up by around 40% since 1 January 2017 according to VesselsValue as per 10 April 2017. 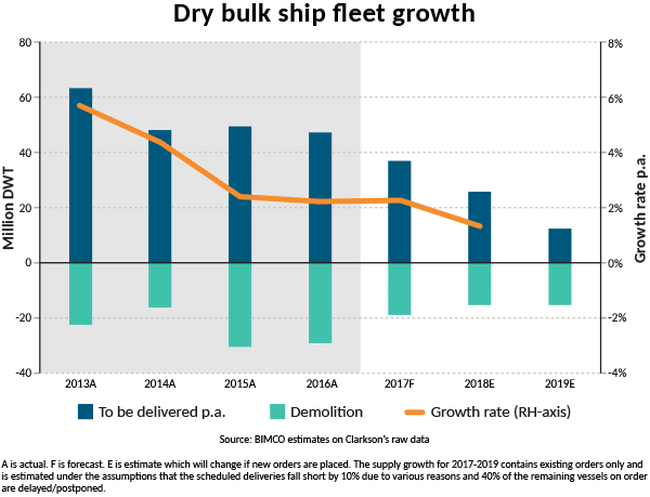 With powerful sentiment in the market being felt and heard, it’s hard not to get carried away. You can almost feel the fear of missing out on the next super cycle as owners’ rush to the second-hand market to expand their fleets. Such strong growing interest has seen rising asset values. In turn, this also means existing ships are no longer priced significantly below newbuild ones.

What it could also mean is a return to the shipyards for some of the owners who did not get the ships they were looking for in the second-hand market. So far, we have not seen a flood of new orders, but the shipyard industry certainly stands ready to take owners’ new orders.

Should such a flood of new orders come around, it will kill the ongoing recovery of freight market earnings. A lot of shipyards have a low order cover, and idle capacity to build. Add tempting leasing deals or other fully financed offers to that, and you may see orders coming in large numbers. But bear in mind, as BIMCO has cautioned earlier, making use of shipyard capacity to produce more new ships remains the most potent threat to the sustainability of the shipping market.

For the coming months, April to June, BIMCO expects the demand in the freight market to go higher. Iron ore and soybeans will grow the most, while coarse grains are set to be in lower demand – driven down by low Brazilian exports.

For the supply side of the market, BIMCO expects some steam to come off. We have seen 16 million DWT being delivered in less than three months, out of a total expected amount of 37 million DWT.

In total this will support the freight market. Having said that, the strong lift of freight rates in Q1 may have been a ‘false dawn’. In conclusion, the freight rates are expected to slide back to a lower level again.

China has announced a ban on imports of North Korean coal until the end of 2017. China imported 22 million tonnes of anthracite coal from North Korea in 2016 and will need to source this from elsewhere if the ban is fully enforced. If the 22 million tonnes are sourced from seaborne suppliers, it will benefit the demand in the dry bulk shipping industry significantly.