Spirit of Vancouver Island owned by BC Ferries, has been converted at Remontowa Shiprepair Yard SA. On 28 February 2019 the ferry departed from the yard following the completion of a mid-life upgrade (MLU).

The Spirit of Vancouver Island ferry entered Remontowa SA on October 15, 2018. She has undergone modernization, upgrade and machinery conversion completed in February 2019. Then the ship began her voyage across the Atlantic, the Panama Canal and a passage along the west coast of North America to Richmond in Canada.

She is a sister ship to Spirit of British Columbia and the second of a “Spirit” class ferries which has her propulsion system converted at Remontowa SA from traditional diesel based to environmentally friendly, powered by liquefied natural gas. 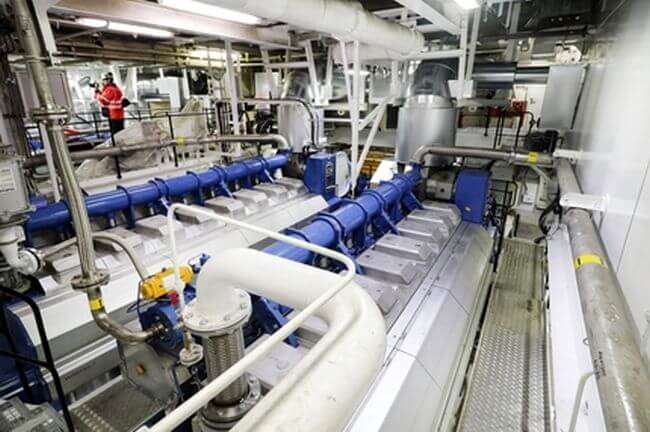 The shipyard equipped each of the „Spirit” class ferries with four new dual-fuel Wärtsilä 8L34DF main engines and a cryogenic tank. Currently, the ship’s engine room is dual fuel, adapted to be fed both with low-sulfur diesel oil and natural gas (stored as LNG) as the main fuel.

Other upgrades have included i.a. the renewal of navigation and propulsion equipment as well as passenger areas.

BC Ferries has congratulated Piotr Soyka, the co-owner and chairman of Remontowa Holding for an on-schedule delivery of the Spirit of Vancouver Island in a special letter singed by Mark Collins, President and CEO and Mark Wilson, VP Strategy & Community Engagement at BC Ferries.

They have expressed their gratitude for „the end result of this two-ship conversion project” and for „stepping up to the challenges and making the necessary adjustments to make the Spirit of British Columbia and Spirit of Vancouver Island a successful MLU program”.

In the letter to Piotr Soyka they emphasize, that both ferries mid-life upgrades „were major undertakings on our two most important ships”. They also appreciate, that „a significant amount of pre-fabrication work and procurement took place long before the vessel even arrived and a comprehensive project plan was executed with excellent project management. Finally, the attention to detail and quality in the finishing of passenger areas met or exceed my expectations in all respects” – Collins and Wilson pointed out.