Baleària, one of the pioneer shipping companies in the use of liquefied natural gas (LNG) worldwide, has presented today at the International Tourism Fair of Madrid the first two ferries powered by this clean energy that will operate in the Mediterranean. These are two innovative ships that are being built in the Italian shipyard Cantiere Navale Visentini. The president of the shipping company, Adolfo Utor, remarked that they are two ships “destined for the Balearic Islands”. It is foreseen that at the beginning of 2019 the first will begin to sail, which will be a new milestone for a shipping company that is already a benchmark in innovation and sustainability. 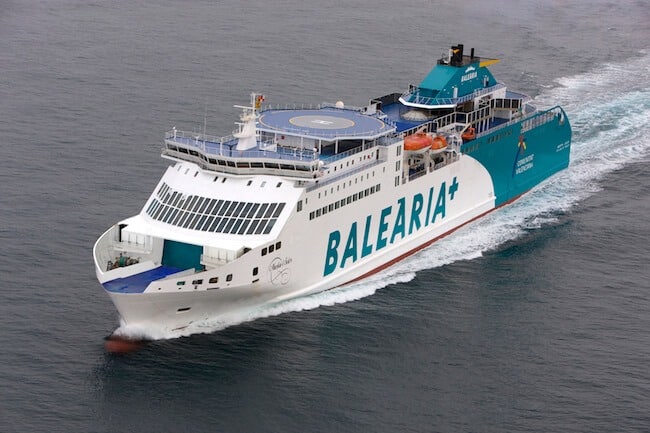 The president of Baleària, Adolfo Utor, pointed out that the company’s commitment to the environment “is a strategic determination, based on the use of liquefied natural gas, as well as other clean energies, and the eco-efficiency of the fleet”. Utor has detailed that LNG allows to reduce carbon emissions by 30% (CO 2)), 85% of nitrogen oxide (NOx) and totally eliminate emissions of sulfur and particles. “The use of this respectful fuel has an immediate impact on air quality and the greenhouse effect,” he remarked. These are two sustainable vessels where technology and digitalization will be at the service of energy efficiency, since in addition to dual fuel engines and LNG (with a power of 20,600 KW) these ships will have photovoltaic panels, LED lighting or control of the trimming, among others.

The presentation was attended by the general director of the Merchant Navy, Rafael Rodríguez Valero, who gave “congratulations to Baleària for being a pioneer in the use of natural gas”, and the Minister of Territory, Energy and Mobility of the Balearic Government, Marc Pons, who remarked that the shipping company “makes an exemplary use of clean energy to be more competitive and provide the best service.” The event was also attended by the general director of the port of València, Francesc Sánchez; the director of the port of Ceuta, Pepe Torrado; the Minister of Tourism of Ceuta, Emilio Carreira, and the commercial manager of the Port of Barcelona, Anna Arévalo, among others.

The president of Baleària has revealed that the new ships will be baptized Hypatia de Alejandria and Marie Curie, “two scientific women of the history of humanity, in line with one of the goals established by the Sustainable Development Goals: equality and empowerment of women. ”

Baleària will invest 200 million euros in the construction of these two smart ships pioneers in the Mediterranean, with identical characteristics: 186.5 meters in length, the maximum speed of 24 knots and capacity for 810 people, 2,180 linear meters of cargo and 150 vehicles. “We are working on two smart ships where the digitalization of onboard services will be an added value, which will make the trip a unique experience,” said Utor. Thus, these smart ships will include video surveillance of pets, access to services on board via mobile and digital leisure on demand, among other services.

Currently, the Hypatia de AAlejandría,which is scheduled to be delivered to the shipping company in February 2019, has virtually completed the hull and main engines installed, while the tanks will be incorporated in the coming weeks. Regarding the Marie Curie, 30% of the hull has already been built and the installation works are starting.

The president of the shipping company has linked Baleària’s commitment to have an eco-efficient fleet with the Sustainable Development Goals of UNESCO, signed by the shipping company, which are based on sustainable economic growth and the defense of the planet. “We bet on clean energy because we are convinced that we can fight against climate change and at the same time be competitive,” said Utor. The head of the shipping company recalled that Baleària is already a pioneer in the use of liquefied natural gas: for a few months, the ferry Abel Matutesoperates in the stays in the ports of Palma and Barcelona with the first auxiliary LNG engine in Spain. In addition, he explained that it is planned to remotorizar some ships of the fleet so that they can be propelled by this fuel more respectful with the environment.