An American rescue swimmer who saved four men from a sinking ocean-going rowing boat was reunited with three of the people he rescued in an emotional ceremony at IMO Headquarters yesterday (19 November).

Aviation Survival Technician Christopher Leon of the United States Coast Guard received the IMO Award for Exceptional Bravery at Sea for his part in the dramatic rescue of four ocean racers from the Pacific Ocean. He was thanked in person by grateful rescuees Sam Collins, Fraser Hart and James Wright, all from the United Kingdom, during the award ceremony.

The three rowers, along with Mr. Colin Parker from New Zealand, had been taking part in part in the Great Pacific Race in June 2014 when their four-man boat Britannia 4 began sinking in severe conditions. The race support vessel had been unable to reach the stricken rowing boat and its crew due to 30 knot winds and 15 to 20-foot waves. The rowers owe their lives to the efforts of rescue swimmer AST Leon, who had been lowered to the sea to assist them, and to the successful hoists performed by the helicopter crew in conditions compounded by darkness, lack of visual cues and horizon and breaking waves. 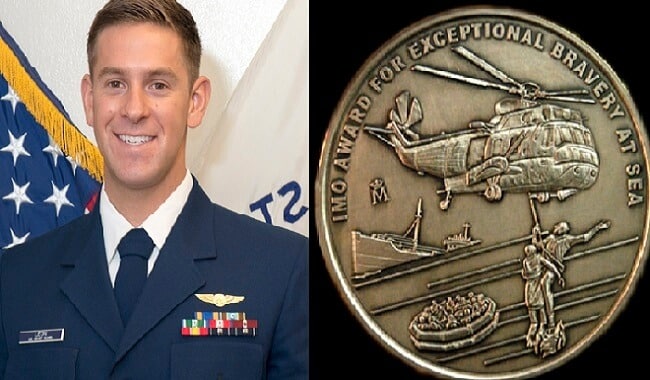 Speaking at the ceremony, AST Leon said he was pleased to meet the rescuees for the first time since the fateful night, and in entirely different circumstances.  He said he was honoured and humbled to be receiving the award and thanked his fellow crew members, who had flown the helicopter through gale force winds to winch AST Leon down to the rowers in the stormy seas below and who had performed a series of demanding recovery hoists to initially rescue three of the men.

When fuel levels on the helicopter became dangerously low and it had to leave the scene to refuel, AST Leon remained with the fourth rower Mr. Hart, huddled in the tiny bow portion of the swamped vessel that remained above water. The two men protected each other from the breaking waves and freezing temperatures.  Finally, the helicopter was able to return through the stormy night and hoist the two men to safety.

“I would especially like to thank the crew of the helicopter, Lieutenant Scott Black, Lieutenant Jesse C Keyser and flight mechanic Michael Spraggins, because nothing I do, can be done without them; and everything we do is a team effort – especially for this case,” AST Leon said. .

Rescuee Sam Collins thanked AST Leon and the helicopter crew at the ceremony, acknowledging that setting out to row the Pacific Ocean was a selfish act, for their own good, while AST Leon had acted selflessly to rescue them.

“What Chris did was a completely selfless act. Something quite special. Chris Leon woke up in the morning and no doubt brushed his teeth, had a normal day. And then, in the darkness of night, a year and a half ago, he launched himself off the side of a helicopter into gale force winds and over six metre high seas just to save our lives,” Mr. Collins said.

“And as a result we are alive. We will have children. Our children will go on to have children. And we can hopefully repay him, by making the most of our lives. So what I am trying to say, is: thank you, Chris, you really deserve this award for what was a truly exceptional act of bravery at sea,” Mr. Collins said.

AST Leon and the crew of the rescue helicopter CG-6531, US Coast Guard Air Station San Francisco were nominated by the United States. AST Leon received a medal for the highest award and a certificate.  His fellow crew on the night of the rescue, Lieutenant Scott Black, Lieutenant Jesse C Keyser and Aviation Maintenance Technician Michael Spraggins received certificates for their role.

During the award ceremony, certificates of commendation were also presented to the following:

Vicente Somera from the Philippines, crew member of the container ship Lars Maersk, was at the ceremony in person to receive a certificate for his role in rescuing a stricken yachtsman from the Enya II in heavy weather in the Tasman Sea, some 70 nautical miles from the nearest land, when the container ship responded to a distress alert.  Crew member Somera, with little regards for his own safety, climbed down an accommodation ladder to grab the yachtsman, using his own body to shield him from being crushed by the swinging ladder. Mr. Somera was nominated by Australia.

Skipper Jean-Claude Van Rymenant was also at the ceremony in person to receive the certificate awarded to him and the crew of the rescue launch SNS 129 Notre Dame de la Garoupe, volunteer rescuers based in the French Caribbean island of Saint Martin.  They were nominated by France for the rescue of a woman, her husband and a baby from a yacht as Cyclone Gonzalo hit the island in October 2014. In high winds and poor visibility, the rescue crew swam to the Voyage II, which had struck a reef, and managed to bring the family to safety. The crew went on to assist people from around 20 more ships and boats which had been grounded in the cyclone.

Father Ilia Kartozia (posthumously), Abbot of the Monastery of Saint David the Builder, Patriarchate of Georgia, was nominated by Georgia for his role in helping fellow passengers to escape the Norman Atlantic ro-ro ferry, which was carrying nearly 500 passengers and crew when its car deck caught fire in heavy storms during a crossing from Greece to southern Italy. Survivors reported that Father Ilia had encouraged them during the rescue and had refused opportunities to save himself, giving up his place in a lifeboat to make room for a Greek woman and her baby.  Despite the best efforts of rescuers, Father Ilia fell into the sea and sadly drowned. His body was found on the Italian shore.  The certificate was received by Igumen Father Dorote Barbakadze, Dean of the Georgian Orthodox Church in London, on behalf of Father Ilia.

Lieutenant John Hess, Lieutenant Matthew Vanderslice, Aviation Maintenance Technician Derrick Suba and Aviation Survival Technician Evan Staph, crew members of the rescue helicopter CG 6033, US Coast Guard Air Station Cape Cod, were nominated by the United States for rescuing a father-son team aboard the yacht Sedona, who had set sail for Australia but had been stranded some 150 nautical miles from the nearest land during a powerful winter storm. Freezing temperatures, high seas and strong winds hampered efforts to reach the stricken yacht and seven difficult and dangerous hoists were needed to rescue the two men.  The certificates were received on their behalf by Rear Admiral Paul Thomas, Assistant Commandant for Prevention Policy at United States Coast Guard, Mr. Jeffrey Lantz, Director of Commercial Regulations and Standards at the United States Coast Guard and Mr. Edward Heartney, Counsellor for Environment, Science, Technology and Health at the US Embassy in London, and Permanent Representative of the United States of America to IMO.

In addition, Letters of Commendation have been sent to:

For the 2015 award, 27 nominations for the bravery award were received, from 10 IMO Member States and two non-governmental organizations in consultative status.