An Australian Navy ship has seized a huge cache of weapons near Oman’s coast from a fishing vessel bound for Somalia, the navy said on Monday, exposing a possible violation of a U.N. Security Council arms embargo.

The United Nations has a decades-long arms embargo in place against Somalia, which has been mired in conflict since civil war broke out in 1991.

The Australian navy, which patrols waters around the Indian Ocean as part of an international maritime force, said it had seized nearly 2,000 AK-47 rifles, 100 rocket-propelled grenade launchers, 49 PKM machine guns, 39 PKM spare barrels and 20 mortar tubes from the fishing vessel.

“The weapons were seized under United Nations sanctions, which authorize interdiction on the high seas of illicit weapons destined for Somalia,” the navy said in a statement. 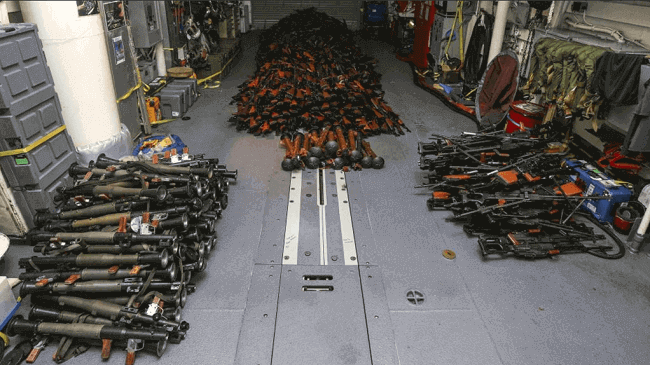 In 2013, the U.N Security Council eased some of the embargo restrictions, allowing the Western-backed government in Mogadishu to buy light weapons to bolster its armed forces in the battle against Islamist al Shabaab insurgents, who are aligned with al Qaeda.

One Western security source said the street value of the Australian Navy haul appeared to be more than $2 million.

The Australian Navy did not indicate who was the intended recipient of the weapons, which were found hidden under fishing nets. As well as al Shabaab, some regional states in Somalia operate and equip their own militias without the approval of the central government.

A Somali government spokesman could not immediately comment on the Australian Navy statement.

The navy said personnel from HMAS Darwin had boarded the fishing vessel about 170 nautical miles (313 km) off the coast of Oman to verify which flag it was sailing under and they determined that it was stateless.

HMAS Darwin is in the region as part of the Combined Task Force 150, responsible for counter-terrorism operations, curbing piracy and drug smuggling.