Austal Limited (Austal) is pleased to announce the United States Navy (USN) has accepted delivery of USNS Yuma (EPF 8) during a ceremony held aboard the ship at Austal USA’s shipyard in Mobile, Alabama, USA.

USNS Yuma, named after the City of Yuma, Arizona, is the eighth Expeditionary Fast Transport (EPF) vessel designed and constructed by Austal for the USN, under a contract for twelve vessels worth in excess of US$1.9 billion. 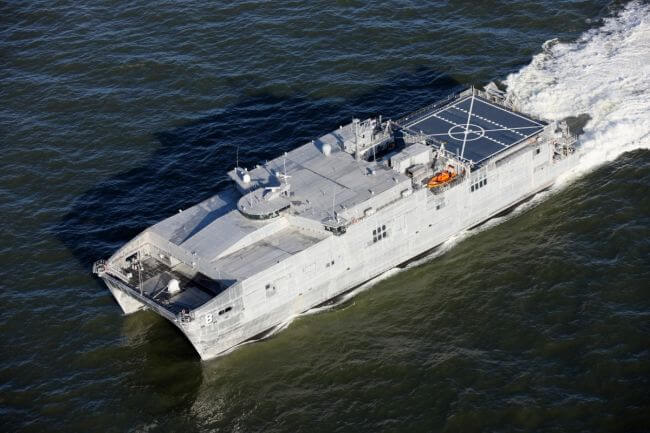 “The EPF platform continues to impress both operators and end-users with its unique, multi-mission capabilities and is now leading US Navy and other humanitarian missions, traditionally led by single- purpose logistics vessels,” Singleton said.

“USNS Yuma is the latest addition to a growing fleet of ‘smart ships’ that Austal is delivering globally, on-time and on-budget,” Singleton added.

The EPF platform provides the USN with a high-speed, intra-theatre transport capability. The 103 metre long Yuma is an all-aluminium military catamaran capable of transporting troops, vehicles and cargo up to 1,200 nautical miles at an average speed of 35 knots. With a shallow draft, the vessel is designed to operate in austere ports and waterways, providing added flexibility to the USN. The EPF’s flight deck can also support flight operations for a wide variety of aircraft, including a CH-53 Super Stallion.

Three Spearhead-class EPF vessels remain under construction at Austal USA, including the future USNS City of Bismarck (EPF 9), to be christened in May 2017. Modules for Burlington (EPF 10) and Puerto Rico (EPF 11) are under construction in Austal’s module manufacturing facility (MMF).