You are here: Home › Shipping News › Aussie Crew Treated Like Convicts On Board CSL Melbourne
TwitterFacebookLinkedInPinterestBuffer

The 16 Australian crew on board the CSL Melbourne have been locked out from accessing food in another attempt to get them to leave the ship.

In a disgraceful move, locks have been put on the fridges and all fresh food removed from the ship.

The crew on board the vessel, chartered by Pacific Aluminium, were given a block of home brand cheese, butter, diced ham, bacon and some bread.

“These are convict rations as bad as what was given to prisoners on the First Fleet sailing out to Australia,” MUA Assistant National Secretary Warren Smith said.

CSL told the crew fresh food would be replaced, but instead they were shocked to find locks on the fridge.

All officers are receiving gourmet pre-packaged food including meat, salad, fruit and vegetables. 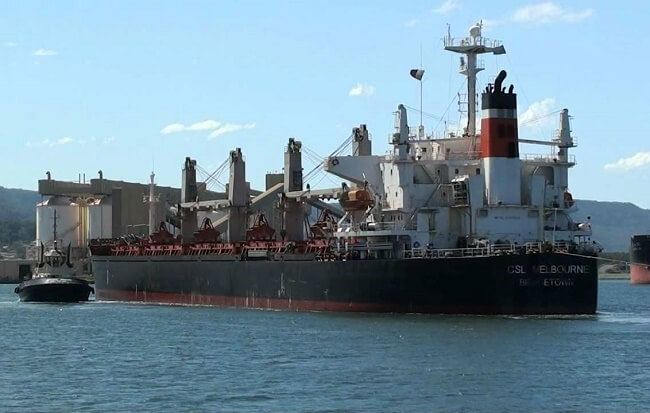 Another CSL ship, The Iron Chieftain, is arriving in Newcastle today and the MUA understands the crew has been informed all shore leave has been cancelled, effectively making them prisoners.

“We have convict rations on one ship and convicts on the other,” Mr Smith said.

The Aussie crew of the CSL Melbourne are refusing to leave the ship after being told last week their jobs will be lost when they sail the vessel to Singapore.

The CSL Melbourne has been running alumina between Newcastle and Gladstone for the past five years but these jobs will go after the company received a temporary licence from the Turnbull Government in the past month.

“It appears Pacific Aluminium and/or CSL have conspired with the Turnbull Government to utilize loopholes in the Coastal Trading Act to see the demise of yet another Australian ship,” Mr Smith said.

“Australia has cabotage laws which cover trade through domestic ports and the use of both Australian-flagged and Australian-crewed vessels. The Senate voted in November to retain these laws yet the Government has again pushed ahead with the issuing of a temporary licence.

“This is a slap in the face for the Senate and the workers whose jobs are on the chopping block and their friends and families in the local community.

“The Government needs to be reminded that Australian jobs are important – these workers have families, kids, mortgages and bills to pay.”

Australian crews are among the most highly-trained in the world and all have high-level security screening. As a result, Australian-flagged ships are demonstrably safer than Flag of Convenience (FOC) shipping and have a strong record in protecting our pristine coastline.