The role of a thruster and thruster components onboard large seagoing vessel. Large seagoing vessels are designed for crossing open water quickly and efficiently while carrying their cargo of goods or passengers. In an open water environment, very fine manoeuvrability is not necessarily a high priority in designing and specifying such vessels.

When entering or departing port, however, particularly in more challenging weather conditions – fine control of a vessel is important to ensure no damage to either the vessel, dock, cargo or crew is caused. 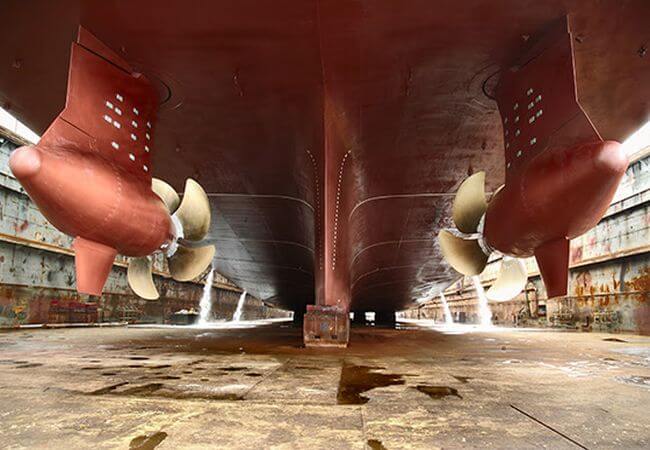 If you spend a lot of time moving through open water and have the option of support when performing more challenging docking manoeuvres, basic propulsion in the form of a propeller and a rudder is likely the simplest and most cost-effective means of moving the vessel.

However – if a larger proportion of time is spent entering and leaving port, or the cost, time and availability of support from tugs are prohibitive, it makes sense to equip your vessel with the means to perform its own fine manoeuvres.

In the case of traditional propeller propulsion, simple fore or aft thrust alone is provided by running the shaft in opposite directions of rotation. While moving through the water, the rudder provides steering at the rear of the vessel, and while stationary some directional thrust if mounted behind the propeller.

There are a number of alternative thruster configurations that can be fitted to vessels to improve upon manoeuvrability – primarily while the vessel is moving at low speed or at rest.

Passing completely through the vessel hull, tunnel openings allow water to be pumped from one side of the vessel to the other, producing thrust. In the centre of the tunnel, a propeller rotates on an axis perpendicular to the main propeller shaft, in a horizontal orientation. The tunnels can most often be found closest to the bow or stern of the vessel to deliver a maximum of rotational effort on the vessel when used in opposite directions.

The propeller and gearbox assembly mounted within the tunnel can usually be removed for maintenance or repair.

In this configuration, the thruster protrudes from the bottom of the vessel, looks something like a hairdryer and is free to be rotated – sometimes as much as 360°. These provide more flexibility than a tunnel thruster where the angle of thrust can be varied, rather than fixed in the orientation of the tunnel.

In some applications they can also be the main source of propulsion, replacing a traditional shaftline altogether.

Again, these can usually be removed for maintenance and repair.

This provides the container within which all of the operating components are located, protected from the sea and debris, and the means by which the thruster is mounted to the vessel. Generally, the housing will be made from a cast iron material which has a paint or similar coating to provide protection from corrosion and marine growth. The housing will have zinc or aluminium anodes to further protect itself from galvanic corrosion.

During maintenance the housing is checked for any damage, which can usually be repaired by welding subject to classification requirements. Any worn or excessively corroded interfacing surfaces can be renewed by machining to re-establish their flatness and surface finish.

In the most extreme cases where the housing is beyond repair, it is possible to replace it entirely, rebuilding the thruster with remaining or replacement components.

As thrusters are generally not aligned with the direction of rotating equipment within the vessel driving them, or at the same speed, they contain multiple shafts and gear arrangements. Some thrusters operate with purely mechanical power transmission, where others will contain a series of hydraulic or electric driveline components.

Supporting these drive components will be rolling and plain bearings, thrust pads and even brakes. All of which require lubrication and cooling. Most often the housing is filled with a lubricating oil which circulates around the system. In the case of a hydraulically driven thruster, a separate hydraulic fluid will be circulating to transmit power.

During overhaul, the drive components will be removed from the main housing and inspected for wear and any damage. Typical damage that may need to be addressed includes:

Bearings would usually be replaced with new items.

In order to prevent contamination of thruster oils and fluids with dirt, debris and water, static and dynamic seals are fitted throughout the thruster housing. These range from gaskets between different sections of housing, to O-cords and rotating lip or face seals around rotating components.

Wearing and elastomeric components of all rotating seals would all be replaced as part of a thruster overhaul. It may also be necessary to upgrade some components in order to operate on a different type of lubricant – such as a biodegradable oil.

All static seals, gaskets and O-cords would be replaced on reassembly.

In the case of a thruster with variable pitch propeller blades, additional components in the form of a yoke and sliding assembly would also feature in the equipment. The relative movement of these components within the thruster allow the pitch of the blades on the propeller to be continuously variable giving varying thrust and direction during operation.

These wearing components would be inspected as part of an overhaul and machined, or replaced as necessary to ensure correct operation.

As experts in marine engineering and official agents for Aegir-Marine, AtZ are able to assist with a range of Seal and Thruster parts and service. Ranging from onsite seal consultancy, servicing and leak prevention to specialist thruster overhaul and repair in dock or at Aegir’s custom built thruster workshop.