Recognised as a world leader in the provision of autonomous surface vehicles, ASV has been enlisted as part of the Thales-BAE consortium to develop and deliver the first complete operational unmanned mine countermeasures system.

The programme seeks to offer a low risk, robust and reliable solution into the UK/French Maritime Mine Countermeasures (MMCM) requirement.

The USV capability to be provided by ASV has been proven and validated at sea through the Halcyon multi-role USV. The vehicle which was showcased at DSEI 2013 had its full autonomy capability validated in a demonstration to the UK MOD which took place in September 2014. 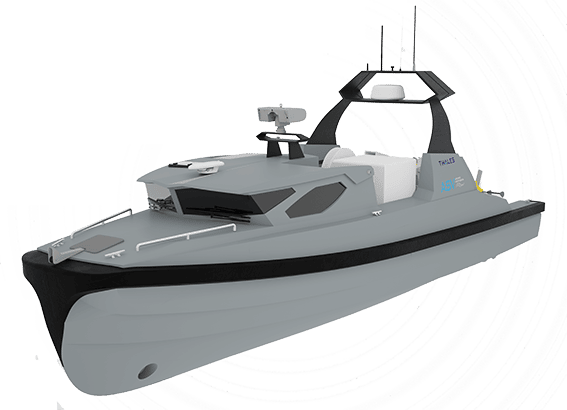 “Our Halcyon class of multi-role Autonomous Surface Vehicles has been developed over the course of our long standing relationship with Thales to offer the ideal solution to the MMCM programme. Developed from the Halcyon design, the more complex and capable mark II offers greater efficiency, stability and an increased payload capacity” said ASV Managing Director Dan Hook.

Maritime autonomy is recognised as a key area of technological development reflected by the investment being made by the UK and French MOD into the development of an MCM solution centred on autonomous and unmanned systems. This MMCM programme seeks to demonstrate the maturity of the industry provided autonomous solutions.

Broken down into various stages, the programme output will be two identical systems for evaluation against several predefined operational scenarios. Following an initial de-risking study, detail design has now begun. This first official stage comprising a design study prior to system build is scheduled to run until the end of 2016. This will also involve working with the end user to define the requirement and place consideration on other external factors. Stages 2 and 3 will include the system manufacture and demonstrations.

ASV is a leading manufacturer of Unmanned and Autonomous Marine platforms with specialist expertise and experience in design, build, operation and maintenance. ASV provides solutions for commercial, defence and scientific applications in the UK and across the globe.