You are here: Home › Shipping News › Arrests And Prosecutions – A Positive Response To Piracy (Infographics)
TwitterFacebookLinkedInPinterestBuffer

Despite an overall global reduction in serious piracy attacks this year, the International Maritime Bureau’s Piracy Reporting Centre (IMB PRC) cautions against complacency in its 2015 report for the year to 30 September.

In Southeast Asia, a piracy crackdown appears to be bearing fruit, with only two hijackings reported in the third quarter of the year. Indonesian and Malaysian authorities have also arrested and in some cases prosecuted, members of product tanker hijacking gangs, notably those behind the MT Sun Birdie and MT Orkim Harmony attacks.

“The robust actions taken particularly by the Indonesian and Malaysian authorities – including the arrest of one the alleged masterminds – is precisely the type of deterrent required,” said IMB Director Pottengal Mukundan. 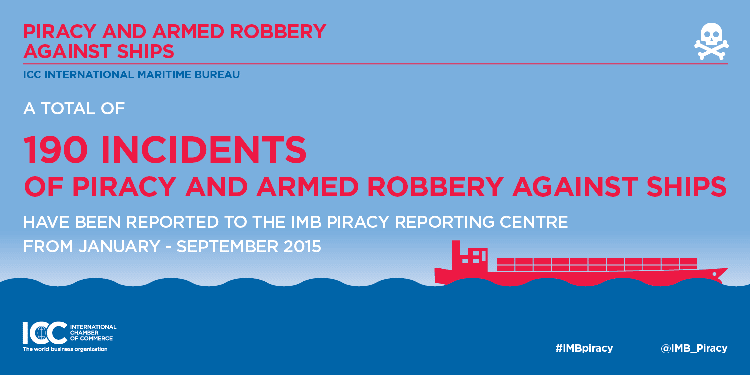 The two hijackings, on a small product tanker in the Straits of Malacca and a fishing vessel 40-miles west of Pulau Langkawi, were among 47 incidents the IMB PRC recorded globally between July and September.

To date 190 incidents of piracy and armed robbery against ships have been officially counted this year, the greatest number in Indonesia, which tallied 86 mainly low-level incidents, followed by Vietnam with 19 low-level reports.

“The robust actions taken particularly by the Indonesian and Malaysian authorities – including the arrest of one the alleged masterminds – is precisely the type of deterrent required,” said IMB Director Pottengal Mukundan.

Actual number of attacks believed to be higher

While only one new incident of an actual attack was reported for the last quarter in the Gulf of Guinea, IMB believes the real number to be considerably higher.

No incidents have been noted off Somalia or in the Gulf of Aden this year, previously a piracy hotspot. IMB says the positive development reflects the combined efforts of navies in the region, along with greater compliance with the Best Management Practices guidelines against Somali piracy, the employment of private security contractors and a stabilizing government. Suspected Somali pirates continue to hold 29 crew members for ransom. 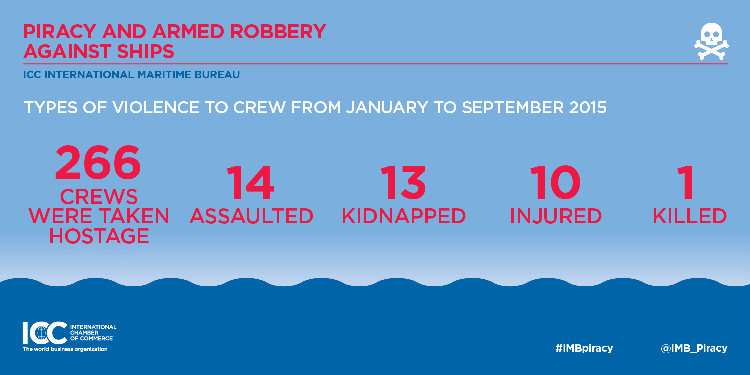 The report urges vessels to maintain vigilance, noting the “increasingly fragile” situation ashore Somalia, with the threat of piracy not “eliminated”.

In all, this year has seen 154 vessels boarded, 21 attempted attacks and 15 vessels hijacked. A total of 226 crew were taken hostage, 14 assaulted, 13 injured, 10 kidnapped and one killed.

As the world’s only independent centre to receive reports of pirate attacks worldwide 24 hours a day, IMB also calls on all shipmasters and owners to report any actual, attempted or suspected piracy and/or armed robbery incidents to its Kuala Lumpur-based Piracy Reporting Centre. 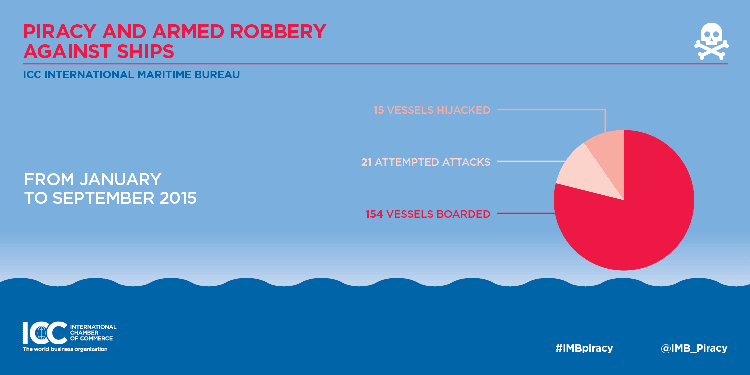 This first step in the response chain is vital to ensuring that adequate resources are allocated by authorities to tackle the scourge of maritime piracy. Transparent statistics from an independent, non-political, international organization is an effective catalyst to achieve this goal.