The Arctic is thawing even faster than lawmakers can formulate new rules to prevent the environmental threat of heavy fuel oil pollution from ships plying an increasingly popular trade route.

Average Arctic temperatures are rising twice as fast as elsewhere in the world and the polar ice cap’s permanent cover is shrinking at a rate of around 10 percent per decade. By the end of this century, summers in the Arctic could be free of ice.

As the ice melts, traffic of ships carrying cargoes of gas, coal and diesel through the region has increased. Russia, in particular, is keen to expand shipping through the Arctic given its rich natural resources and efforts to cut costs. It aims to cut journey times between Europe and Asia by 30 to 40 percent.

“It is time for regulators to wake up and realise that the Arctic is melting away right in front of us,” said Whit Sheard of the Circumpolar Conservation Union (CCU) green group. 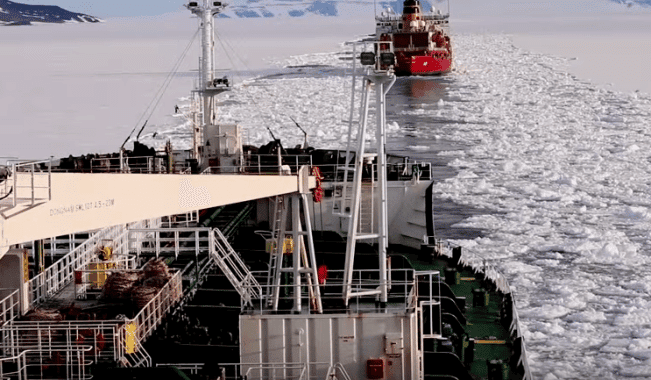 “Common sense regulations, integrated ocean planning, and explicit protections are all needed before the resources of the region are targeted for exploitation or before it becomes a major shipping route.”

While there is a non-binding agreement in place between Arctic states aimed at Arctic environmental protection, campaigners say there has been no progress on regulating the use of heavy fuel oil (HFO), which is banned in the Antarctic region owing to its toxicity and the polluting emissions it generates.

Regulations for the Antarctic came into effect in 2011 after being adopted by the United Nations’ shipping agency the International Maritime Organization (IMO).

It was arguably an easier sell as less commercial cargo ships such as oil tankers operate in the Antarctic, where fishing boats, cruise ships and yachts predominate.

Any effort to tackle the issue is likely to take some time even after last year’s climate deal in Paris, which commits nations to curb emissions. The Paris deal did not set specific targets for commercial shipping, leaving the IMO to take up the charge.

Julie Gourley, senior Arctic official at the U.S. State Department, said Washington, which has the rotating chair of the Council, was “presently studying” the risks associated with HFO and continued to engage with Council partners to find solutions for Arctic issues.

According to a 2009 study by the intergovernmental Arctic Council, the release of oil into the Arctic’s marine environment “either through accidental release, or illegal discharge, is the most significant threat from shipping activity”.

Last year, the U.S., Russia and other Arctic nations signed an agreement to bar their fishing fleets from seas around the North Pole.

Under the Polar Code, which was adopted by the IMO, ships trading in polar regions will have to comply with environmental provisions from January 2017.

The code imposed prohibitions on the carriage of oil or oily mixtures from any ship into the sea and prevented pollution from garbage and noxious liquid substances. But it only “encouraged” ships not to use or carry HFO in the Arctic.

A 2015 study by the CPB Netherlands Bureau for Economic Policy Analysis estimated that two thirds of the volume of world trade that goes through the Suez Canal could be re-routed via the Arctic route in future. It gave no time frames.

Other analysts are more conservative on how much trade could be re-routed given the recent economic slowdown in China and oil price uncertainty.

The Suez Canal, which allows ships to travel between Europe and South Asia, accounts for an estimated 8 percent of world seaborne trade.

The International Association of Oil & Gas Producers (IOGP), representing the global upstream industry, said it had gained extensive experience “in the safest and most environmentally sensitive ways of operating in such conditions”.

“While some parties have called for codes of best practices in the Arctic, as far as the industry is concerned, wherever we do business the same high standards apply,” the IOGP said.

Looser ice means icebergs and there is the risk of vessels being holed. Insurers are also looking for more clarity.

“The level of regulation applying to these new waterways has, perhaps inevitably, not had time to catch up with the physical changes to the Arctic environment,” said Joe Hughes, chairman and chief executive of ship insurer American Club.

“From an insurance perspective, marine underwriters will have concerns in regard to hull and other damage caused by physical hazards encountered in the Arctic, and navigating restrictions.”