Two activists protesting plans by Royal Dutch Shell to resume drilling for oil in the Arctic dangled for several hours on Friday from the anchor of one of the company’s vessels in Washington state before coming down voluntarily, the Coast Guard said.

The women used camping gear and hammocks to attach themselves to the massive chain on the barge in Bellingham, Washington, north of Seattle, the activist group ShellNo said.

They dangled from the vessel, the American Trader, for about five hours after climbing on the anchor chain in the early morning, the Coast Guard said. 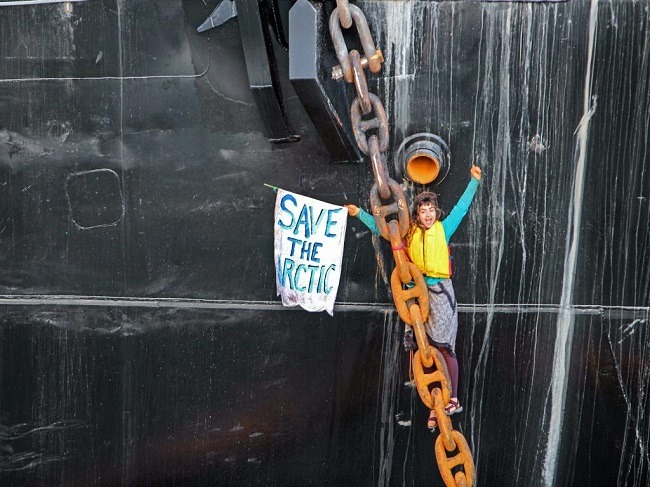 The women came down from their perch on their own accord and were not arrested, police said.

Both are students at Western Washington University, KIRO-TV reported.

Last month, activists chained themselves to a different Shell vessel in Bellingham, the Arctic Challenger. That vessel, an oil spill containment barge, pulled out of the port this week and was the first of the Arctic drilling fleet headed to Alaska, a Shell spokeswoman said on Thursday.

Protesters around Washington have staged ongoing demonstrations over Shell’s intention to resume drilling for fossil fuel in the Arctic, one of the most environmentally sensitive regions in the world, saying a spill would be destructive to the ecosystem and extremely hard to clean up.

Shell maintains that it has a robust safety and cleanup plan should a spill occur. Shell representatives did not immediately respond to a request for comment.

The oil giant, which is still awaiting several federal permits before it can return to the Beaufort and Chukchi seas off Alaska, has said it was continuing to prepare a drilling rig docked in Seattle for the trip north this summer.

The rig has been an epicenter of protests both on land and water, with demonstrators attempting to block workers from reaching the rig. Last month, hundreds of people in small boats and kayaks surrounded the rig in the Port of Seattle.

ShellNo and other groups have vowed to form a flotilla to try to stop the rig from leaving Seattle’s Elliott Bay in coming weeks.