As last October’s MEPC73 meeting closed in London, the Clean Arctic Alliance and Arctic indigenous groups expressed our satisfaction for the support given by many member nations of the International Maritime Organization (IMO), the United Nations body which governs international shipping, towards commencing work on the development of a ban on the use and carriage of heavy fuel oil (HFO) in Arctic waters. 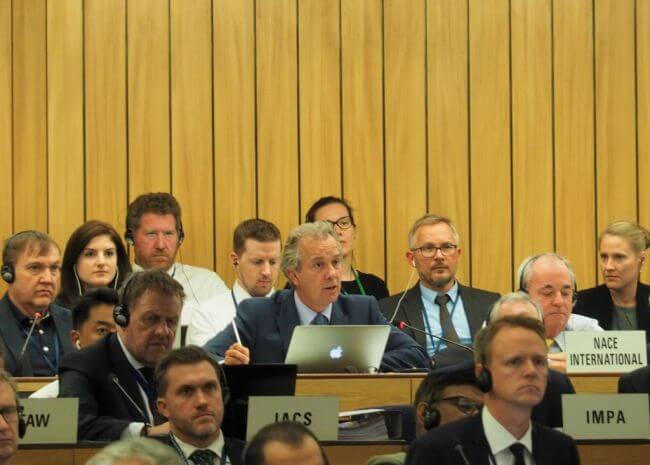 While the news may not appear earth-shattering, progress is often achieved in undramatic ways. After the MEPC73 (Marine Environment Protection Committee) meeting, the Clean Arctic Alliance team afterwards reflected that we would have gotten more news coverage had things gone terribly wrong. That no member countries of the IMO sought to undermine or hinder the development of the ban was highly significant, and a clear signal that there was an acceptance that Arctic waters should get the protection they deserve, and as soon possible.

The support provided by Austria, Bangladesh, Canada, Denmark, France, Germany, Iceland, Ireland, Netherlands, New Zealand, Norway, Spain, Poland and the UK, for the ban being sent to Pollution Prevention and Response subcommittee (PPR6, February 18-22, 2018), in order for the work to mitigate the risks of using and carrying HFO in the Arctic to begin early in 2019. While the development of a ban on HFO use and carriage as fuel is contingent on an assessment of the impact of a ban, MEPC has agreed the need to expedite the work. 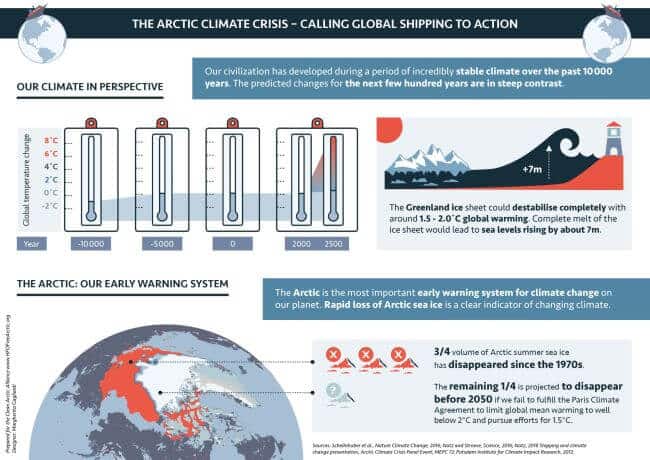 Why is heavy fuel oil so bad?

As global understanding of multiple threats posed by use of fossils fuels has unfolded, perhaps IMO delegations have begun regarding a ban on HFO, for use by ships in the Arctic, as being an obvious way forward to protect both the Arctic environment, and the communities who depend upon it. A ban would cut the risk of oil spills and from emissions and deposits of black carbon, which accelerates ice melt. It is now clear that the impacts of climate change in the Arctic also have repercussions further south – what happens in the Arctic doesn’t stay in the Arctic. One of the ways to lessen our impact on the Arctic is by ending the use of HFO in its waters.

Heavy fuel oil is a dirty and polluting fossil fuel that powers ships throughout our seas and oceans – accounting for 80% of marine fuel used worldwide. With climate change fuelling high winter temperatures and driving summer sea ice melt, Arctic waters are opening up to more shipping. As the sea ice recedes, larger, non-Arctic state-flagged vessels running on HFO are likely to divert to Arctic waters in search of shorter journey times. This, combined with an increase in Arctic state-flagged ships targeting extraction of previously non-accessible resources, could greatly increase the risks of HFO spills. Unless, of course, HFO is banned.

Around 75% of marine fuel currently carried in the Arctic is HFO; over half by vessels flagged to non-Arctic states – countries that have little if any connection to the Arctic.

Already banned in Antarctica, if HFO is spilled in cold polar waters, it breaks down slowly, proving almost impossible to clean up. A HFO spill would have long-term devastating effects on Arctic indigenous communities, livelihoods and the marine ecosystems they depend upon. HFO is also a greater source of harmful emissions of air pollutants, such as sulphur oxide, and particulate matter, including black carbon, than alternative fuels such as distillate fuel and liquefied natural gas (LNG). When emitted and deposited on Arctic snow or ice, the climate warming effect of black carbon is up to five times more than when emitted at lower latitudes, such as in the tropics.

A decade after the Arctic Council published the Arctic Marine Shipping Assessment (AMSA), which identified that an oil spill is the greatest threat to the Arctic from shipping, and seven years after its Protection of the Arctic Marine Environment Working Group published a report commissioned from Det Norske Veritas which concluded that using distillates instead of HFO as fuel would achieve significant spill risk reduction it is significant, if belated, progress that IMO member states are now commencing the work necessary to adopt a ban on the use and carriage of heavy fuel oil (HFO) by ships operating in the Arctic.

So what happens next?

At MEPC 73, member states considered the methodology for an assessment of the impact of a ban ahead of sending the “Scope of Work”- which sets out the work to be done to reduce the risks associated with the “use and carriage of heavy fuel oil as fuel by ships in Arctic waters”, including the proposal for a ban. The methodology for an impact assessment will be finalised and this “scope of work” will start to be addressed at the next gathering of the IMO’s Pollution Prevention and Response subcommittee (PPR 6) in February 2019. 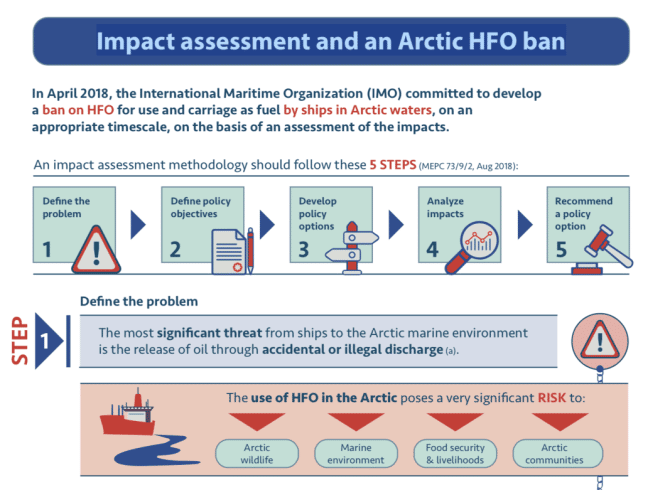 How did all this come about?

In July 2017, the International Maritime Organization’s Marine Environment Protection Committee (MEPC 71), agreed to embark on a body of work aimed at mitigating the risks of HFO. This move was welcomed by the Clean Arctic Alliance, a coalition of non-profit organisations calling for a ban on the use and carriage of HFO as fuel in the Arctic – as the simplest and most effective way to mitigate its effects.

At MEPC 72 in April 2018, a strongly-worded proposal to ban HFO as shipping fuel from Arctic waters was co-sponsored by Finland, Germany, Iceland, Netherlands, New Zealand, Norway, Sweden and the US. The proposal for a ban, along with a proposal to assess the impact of such a ban on Arctic communities from Canada, was supported by Australia, Belgium, Czech Republic, Denmark, Estonia, France, Ireland, Japan, the League of Arab States, Poland, Portugal, Spain, Switzerland, and the UK.

“A single HFO spill could have devastating and lasting effects on fragile Arctic marine and coastal environments,” the Finnish proposal said. “In addition, Arctic shipping is projected to continue to rise, thus increasing the risk of a spill. For these reasons, the ban on HFO should be implemented as soon as possible, and any delay in implementation of the HFO ban by eligible ships should be short-lived.”

For some countries, support was contingent on the outcome of an assessment of the impacts of the ban. Although the proposal for a ban was well supported, not all Arctic countries are on board as yet, in particular Canada and Russia appear to prefer to trial other measures first. We wrote about MEPC72 in depth in an this article: The World’s Dirtiest Fuel will be Banned from Arctic Shipping. Here’s How.

Support from Denmark was particularly notable as it is the sixth (out of eight) Arctic nation to support the ban, and that it was followed by Greenland, which announced its support for an HFO ban in the Arctic in August 2018. The Inuit of Alaska, Canada, Greenland and Chukotka added further weight to the calls to end the use of HFO in the Arctic in the Utqiagvik Declaration (page 4). In November, a Nunavut Inuit organisation, Nunavut Tunngavik, called on the Canadian government to to ban “the use, carriage and transportation” of HFO.

While Russia and Canada have supported IMO work to consider ways to mitigate the risks associated with HFO, to date, however Russia has not supported an outright ban on use of HFO in the Arctic. While this appears to be still the case, the Clean Arctic Alliance notes that a Russian state-owned shipping company Sovcomflot is speaking openly about the need to move away from oil-based fuels, and marine bunker fuel supplier Gazpromneft expects to halt fuel oil use from 2025. Significantly, in August 2018, Russian President Vladimir Putin and Finnish President Sauli Niinisto made a joint statement on the need to move to cleaner ships’ fuels such as LNG in the Arctic.

Canada has previously supported a “phase down” on HFO in a joint Trudeau/Obama announcement in December 2016, and proposed work to mitigate the risks of HFO at MEPC 71 in 2017, however the support for a ban appears to have changed, and for now remains unclear. In a Canadian Press story published on April 5th 2018, Canada not on board plan to ban ‘dirty fuel’ use on Arctic shipping routes, Andrew Dumbrille of WWF, a Clean Arctic Alliance member, criticises Canada for ‘“sitting on their hands”’.

The article says that “Canada, however, wants a delay. It joined the Marshall Islands — one of the most popular places in the world for shipping companies to register their vessels — to submit a request for things to be slowed down until further study on the economic and other impacts of such a ban on Arctic communities can be completed.”

“Dumbrille said 2021 is three years away — plenty of time to develop a plan to get rid of “the dirtiest, the cheapest, the bottom of the barrel fuel on the planet” without placing a burden on northern communities”

Following reports that several prominent shipping companies were starting to move goods across the Arctic, the Clean Arctic Alliance challenged Maersk, COSCO and Fednav to come clean on the fuel they being used. We compiled these challenges – to which we received little or responses to – into a article, first published on Splash 24/7 – Who is Ready for an Arctic HFO Ban? Recent news, that Maersk plans on cutting its carbon emissions to zero by 2050 are ambitious, laudable and nothing short of remarkable. 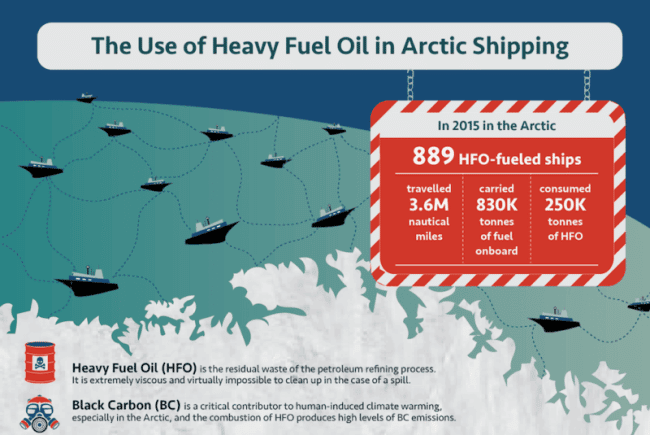 The cruise shipping industry’s use of HFO is also coming under increasing scrutiny, thanks to the work campaigns like Clean Up Carnival, and this recent report from Transport & Environment, Cost analysis of Arctic HFO ban for cruise shipping, which finds that it would cost passengers just the price of a glass of wine a day if cruise ships would stop burning highly polluting heavy fuel oil in the fragile Arctic environment.

What else happened at MEPC? 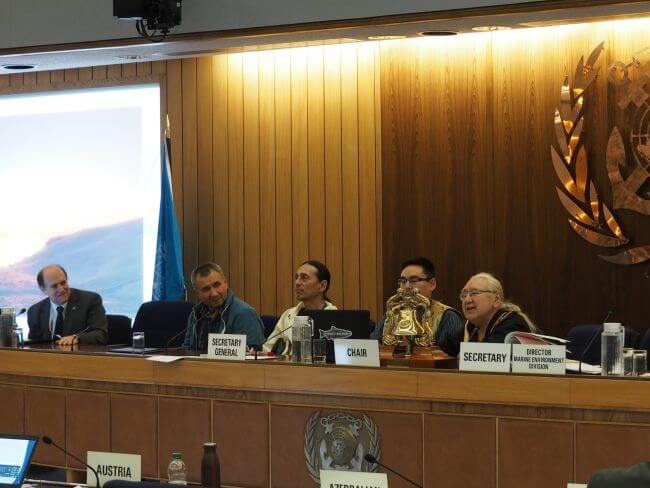 The Clean Arctic Alliance held and took part a number of events during MEPC73, including side events such as Impacts and Benefits of a Heavy Fuel Oil Ban in the Arctic, which discussed economic and community benefits and impacts of a HFO ban in the Arctic, and presented an indigenous community perspective on such ban, along with recent research on:

There was also an event in Spanish, Challenges and opportunities of maritime transport decarbonisation: The initial GHG Strategy and HFO ban in the Arctic, as well as evening event at the House of Lords, Indigenous Perspectives on Polar North Shipping – listen to audio of the event here. More information about these events can be found in our MEPC73 briefing.

Finally, The Arctic – On Our Watch, a photography exhibition organised by the Clean Arctic Alliance, was displayed at the IMO during the meeting. The collection of images from 25 photographers forms a visual journey around the Arctic. The images were put forward by both amateur and professional photographers to show that this seemingly remote and inaccessible region is home to uniquely adapted communities and iconic wildlife. See some of the images and read more…

The exhibition was introduced during plenary by polar explorer Pen Hadow, who strongly about the urgent need for an HFO Ban.