In a ceremony today in the Port of Charleston, American Roll-on Roll-off Carrier (ARC) christened the M/V Liberty, welcoming one of the most versatile and militarily-useful ships to the U.S.-flag commercial fleet, along with close friends and allies from the Department of Defense, Department of Transportation, maritime labor, and a myriad of customers and business partners.

ARC President & CEO Eric Ebeling welcomed guests to the Port of Charleston, a fitting venue as Charleston is a unique port for ARC due to its handling of large volumes of both commercial and military cargoes. South Carolina Ports Jim Newsome was on hand to welcome Capt. Kenneth DeGroff and the rest of the ship’s officers and crew to Charleston. 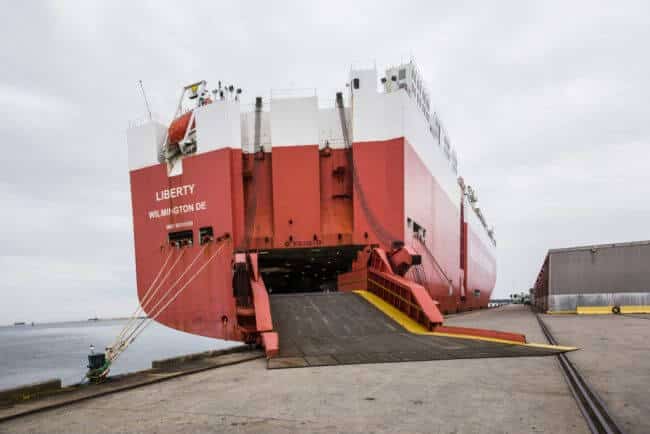 The keynote address was delivered by the Honorable Elaine Chao, the U.S Secretary of Transportation.

“On behalf of the U.S. Department of Transportation and the Maritime Administration, I congratulate the ARC team and welcome M/V Liberty to the Maritime Security Program (MSP) fleet,” said Sec. Chao. “(M/V) Liberty’s entry into the MSP has substantially increased our ability to meet key U.S. Department of Defense force projection requirements. And Liberty is the eighth ARC vessel to enter the MSP, joining seven others already in service. So let me also acknowledge the contributions of ARC to the MSP, national defense, and the U.S. Merchant Marine.”

SIU President Mike Sacco asserted: “We’re totally dedicated to our role as America’s fourth arm of defense, and we are committed to helping ensure the success of our contracted operators. On that note, I congratulate Eric [Ebeling] and his whole team at ARC. On behalf of everyone at the SIU, we respect and appreciate your commitment to American-flag shipping. We also value your partnership as we work together to help revitalize the U.S. Merchant Marine.”

Lieutenant General Lyons, the deputy commander of TRANSCOM, delivered a strong message, stating: “ARC plays a significant role in our nation’s commitment to the security of our nation and our NATO allies. We can’t underestimate the strategic impact of global images depicting the arrival of an armored brigade combat team on ARC’s Resolve, Endurance, and Freedom, or the arrival of a combat air brigade on Endurance and Honor. And now we are happy to welcome Liberty to the fleet.”

Formerly the M/V Topeka, M/V Liberty was re-flagged to American registry on January 31 as the eighth Ro-Ro vessel in ARC’s fleet. The reflag was conducted by the Coast Guard in the port of Bremerhaven, Germany. The vessel is enrolled in the Maritime Security Program (MSP), the bedrock Congressional maritime readiness program, and the Voluntary Intermodal Sealift Agreement (VISA). Consistent with past practice to name ARC ships after American values, she was renamed M/V Liberty.

Mr. Ebeling referenced the decline of the U.S.-flag fleet over the past years from approximately 120 ships to the current 81 vessels, as cargo volumes have declined due to the changing overseas military footprint, lack of a fully functioning Ex-Im Bank, and other factors, but noted “with this incredible partnership between industry, labor, DOT and DOD… there is good cause for optimism for the renewal of the fleet, as represented by this great ship we’re celebrating here today.” In her remarks, Secretary Chao concurred, adding “I know of no better public-private partnership” than MSP.

M/V Liberty is 199.99m long with a beam of 32.26m. The stern opening is 15.2m wide and 5.2m high, with a stern ramp rated for cargo up to 237 metric tons. The vessel is among the most capable and militarily-useful vessels in the U.S.-flag commercial fleet, able to carry tracked vehicles, helicopters, trucks and other military and high and heavy project cargoes.