During two days of testing and evaluation on the 17th and 19th May, 2015, the performance of the Aquarius MAS + Solar trial system on-board Delos was assessed by both EMP and Blue Star Ferries technical personnel as part of the Blue Star Delos Renewable Energy Innovation Project.

The marine computer used on Delos is part of the Aquarius Management & Automation System (MAS) which has been jointly developed with KEI System of Osaka, Japan. The Aquarius MAS monitors the performance of the marine solar power array, charge controllers and batteries plus is connected to the ships fuel flow meters and a newly installed dedicated GPS unit. 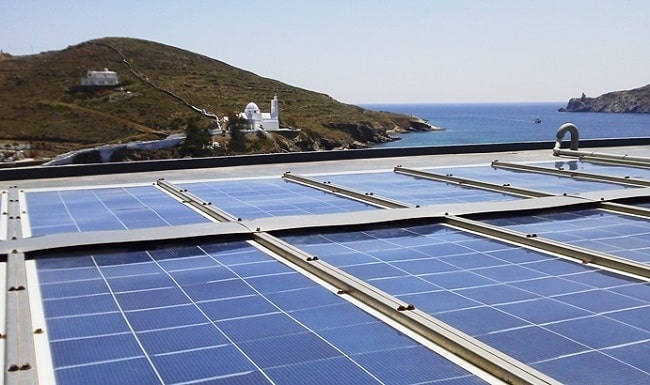 This allows the Aquarius MAS to provide the crew with real-time information regarding the ship’s fuel oil consumption (FOC) plus calculate the vessels Nox, Sox and CO2 emissions.

The Aquarius MAS also displays information about the battery pack status, collected solar power and logs data to a noon report. It can also be used to turn equipment on or off or monitor other equipment on the ship.

The two days of testing and evaluation were conducted as Blue Star Delos sailed on its route though the Aegean Sea from Piraeus to Paros, Naxos, Ios, Santorini and then back to the Port of Piraeus via Ios, Naxos and Paros once again. Each voyage takes around 16 hours with Delos providing the various island communities with a vital transport link as well transporting thousands of tourists to and from these popular vacation destinations in the Greek islands.

On each evaluation voyage it was calculated that the output from the Aquarius MAS + Solar installation was approximately 12.6 kWhr. The system was also easily capable of charging the battery pack plus supplying power to a test load of 24V DC LED lights both during the day and night. 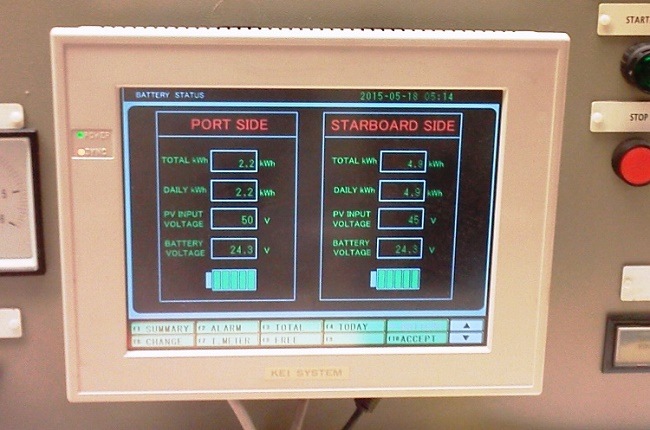 The battery pack used for the trial consisted of 12 FC38-12 batteries supplied by The Furukawa Battery Company of Japan. This company is also working with EMP on other energy storage solutions for shipping and recently the FCP-500 and FCP-1000 series batteries received acceptance for use from Nippon Kaiji Kyokai (ClassNK).

All standard software functions were also confirmed in an operational environment during the system evaluation including alarm handling, inter-connectivity to other system elements and a software update was also performed.

Aquarius MAS + Solar was installed on Delos in October in 2014 and since that time there has been no downtime or service problems detected.

Greg Atkinson, Chief Technology Officer of Eco Marine Power commented “We are very pleased with the results from the evaluation of Aquarius MAS + Solar on Blue Star Delos and together with the acceptance notification from ClassNK in March, this paves the way for its commercial release”.

He added, “We are also very grateful to the support we received during the trial from Blue Star Ferries and the co-operation of the crew on-board Blue Star Delos”.

EMP will present further details of the evaluation trials on Blue Star Delos at the Electric and Hybrid Marine World Expo 2015 in Amsterdam during the 23rd to 25th June and will also display the Aquarius MAS & other technologies at this event along with KEI System Ltd. and The Furukawa Battery Co., Ltd.