Eco Marine Power (EMP) announced that it has received the acceptance from ClassNK (Nippon Kaiji Kyokai) for its Aquarius Marine Solar Power solution as installed on classed vessels. The acceptance of this system is a major step forward for EMP and brings to the shipping market a renewable energy solution that can be integrated with other systems on-board ships.

Power from an Aquarius Marine Solar Power solution can be used for DC or AC loads (via an inverter) and can also be used to provide a reliable source of back-up power which, unlike standard battery-back up systems can be recharged via the marine solar panel array. 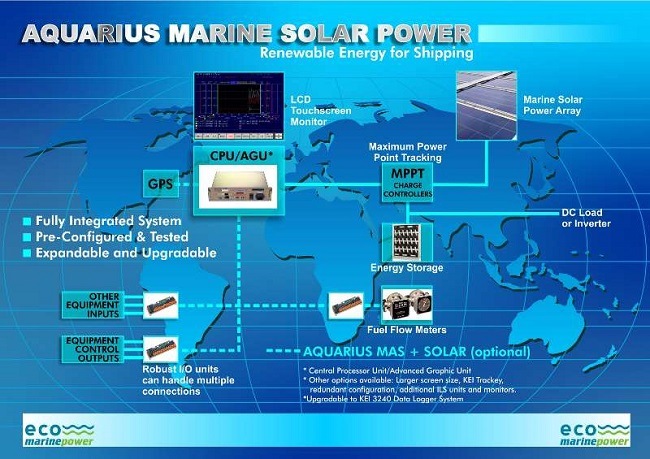 The Aquarius MAS hardware & software platform is based upon the reliable and robust KEI 3240 Data Logger which is already in use on hundreds of vessels including tug boats, training ships, tankers and bulk ore carriers.

Energy storage options for EMP’s marine solar power solutions are provided by the Furukawa Battery Company of Japan and include FC38-12 Valve Regulated Lead Acid (VRLA) batteries (as installed on Blue Star Delos) or FCP-500/FCP-1000 series batteries. FC38-12 batteries are ideal for solar power installations up to around 5kWp. A major advantage of the FC38-12 battery is that it’s relatively small size and light weight makes it ideal for installation into small (but ventilated) spaces on-board ships and other vessels.

FCP (Furukawa Cycle Power) series battery units are a safe and high quality energy storage solution for larger- scale marine solar power installations. These long life batteries (with a lifespan of up to approximately 15 years) are ideally suited to renewable energy applications and are supplied in a modular rack which reduces installation time.

An Aquarius Marine Solar Power or Aquarius MAS + Solar package is suitable for new-building projects and can also be retrofitted to existing vessels. A marine solar power system from EMP can also be integrated with wind power devices including EMP’s EnergySail® technology (under development).

Commenting on this significant step forward Greg Atkinson, Chief Technology Officer of EMP said, “The acceptance from ClassNK of our standard marine solar power system is a major step forward towards bringing type-approved renewable energy solutions to the shipping, marine and offshore industries. It is also becoming clear that solar power has an important role to play on ships in terms of reducing fuel consumption and harmful emissions.”