You are here: Home › Shipping News › Apostleship Of The Sea Calls For Closer Collaboration Between Seafarers’ Stakeholders
TwitterFacebookLinkedInPinterestBuffer

Stakeholders in the shipping industry need to work more closely with Stella Maris-Apostleship of the Sea to ensure seafarers get the right support and help when they need it the most.

“By working increasingly with partners in the industry, including ship managers, owners, P&I clubs and flag states, we believe we can serve seafarers better around the world,” Stella Maris-Apostleship of the Sea National Director Martin Foley said.

“Together, we can improve welfare through regular ship visits, and help seafarers through what may be the most difficult times of their lives,” he said at a reception organised by Stella Maris-Apostleship of the Sea in the UK Parliament on January 16. 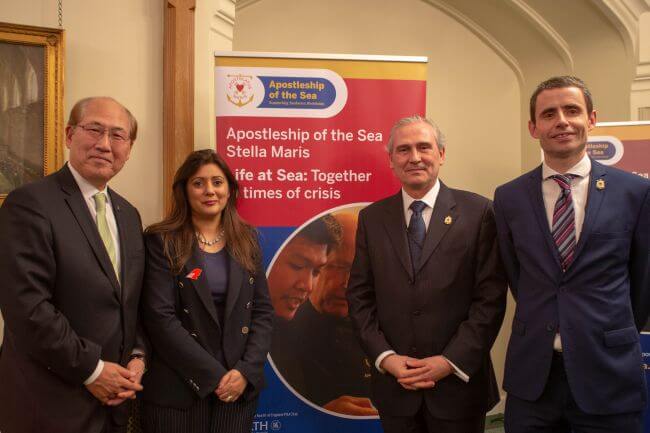 “During my time at sea I have always had the opportunity to experience first-hand the difference that Stella Maris chaplains and ship visitors make every day to seafarers providing a home away from home,” Capt. Pacha said.

He referred to the international strategy recently adopted by the Board of Trustees that “will enable reaching out and support even more those men and women crewing our ships, on whom we all depend so much, aiming to expand further the Stella Maris global network and services to address their needs, their safety and their wellbeing.”

Foley said the report showed that having a ‘friend in port’ is still vitally important for seafarers, even in our technological age.

He said, “Face-to-face contact is unique and irreplaceable, and Apostleship of the Sea’s commitment to routine visiting can help alleviate loneliness and mental health problems in seafarers.

“We are able to provide practical, emotional and pastoral care to seafarers when tragedy strikes, acting as a dependable, trusted friend in times of crisis,” he added.

Shipping Minister Ghani welcomed the launch of the report and in her address said that Apostleship of the Sea’s port chaplains provide pastoral and practical care to all seafarers regardless of nationality race or creed.

“There are many mixed crews of different nationalities and faiths and the fact that the chaplains provide that succour and support regardless of where they’re from is absolutely unique in the work you do, so thank you so much.

She added, “As friend, advisor and confidante, I know that seafarers trust the chaplains implicitly to support them even when the seafarer is no longer in port no matter what the circumstances.”

Ms Ghani said the UK had done a lot to ensure that the physical and mental wellbeing of seafarers are protected and that all seafarers enjoy the high standards of employment they deserve.

“However, when regulation is not possible or not effective, the mariner will always know that the chaplain will always be there. I thank the Apostleship of the Sea for all the work they do.”

In his speech, IMO Secretary-General Lim highlighted how seafaring is still a vital profession and stressed the importance of caring for seafarers’ welfare and wellbeing.
“I speak from the heart when I say how much I appreciate the work that Stella Maris-Apostleship of the Sea does.”

Around the world, Stella Maris-Apostleship of the Sea receives an average of two requests for help every week, half of which come from industry partners, including ship owners and managers and P&I clubs.

Stella Maris-Apostleship of the Sea’s Life at Sea Report looks at how ship visiting and pastoral care for crews continue to remain vital. It illustrates cases of seafarer abandonment, non-payment of wages, stress and mental health problems, bullying and harassment, medical emergencies, and refusal of shore leave.

Vatican Calls For Protection Of Seafarers’ Wellbeing, Safety And Rights

Tags: Apostleship of the Sea