Phase I of the $900 million semi-automated deep-water terminal at Mexico’s second-busiest container port to open soon with 750 meters of quay and 1.2 million TEU annual throughput capacity. 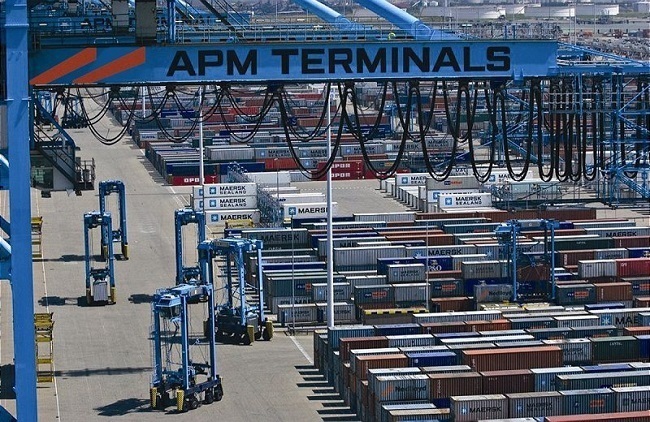 “Mexico is not only the second-largest economy in Latin America, but also one of the world’s Top 15 manufacturing economies, including having become one of the world’s top five car makers, and we feel that investing in Mexico’s continuing economic and trade progress is a sound business strategy” stated APM Terminals CEO Kim Fejfer, who toured the TEC2 site on Mexico’s Pacific Coast earlier this week.

Manufacturing, and the supply of components destined for Mexican factories for assembly and export to the USA as well as overseas, has become an increasingly important sector of Mexico’s $1.16 trillion economy since the North American Free Trade Agreement (NAFTA) linked the US, Canadian and Mexican markets 22 years ago. President Enrique Peña Nieto has emphasized that the implementation of recent reforms enacted by the Mexican government along with 44 trade agreements now in place, have positioned Mexico as one of the most attractive economies for global investment opportunities.

The USA is the destination of 78.8% of Mexican exports, and also provides 49.1% of Mexico’s imports, followed by China (16.1%) and Japan (4.5%). The International Monetary Fund (IMF) has projected the Mexican economy to grow by 2.6% in 2016 and by 2.9% in 2017. Mexican ports handled a combined 5.4 million TEUs in 2015, reflecting a growth rate of 7%, far outperforming global container market growth of just over 1% for the year. Throughput at the Port of Lázaro Cárdenas rose by 6% in 2015 to 1.05 million TEUs, trailing only Manzanillo, with 2.4 million TEUs handled in 2015 among Mexico’s busiest container ports. At full build-out, TEC2 will double the quayside to 1,485 meters, increase the number of STS cranes from seven to fifteen, and more than double annual throughput capacity to 4.1 million TEUs. TEC2 will be linked by intermodal rail to the US rail network and to Mexico’s most important consumer market, in the Mexico City area, generating 26% of Mexico’s economic output, with a population of 20 million, including a substantial and rising middle class of consumers.

“We view the Latin American market, and particularly Mexico, as an area of great opportunity” said Mr. Fejfer.