APM Terminals Pecém reported a 19% annual increase in container handling volumes as the gateway port to northeast Brazil. APM Terminals Pecém, which is the container operator at the Port of Pecém which is managed by the state-owned company CIPP (former Cearaportos), handled 130,008 moves (213,951 TEUs – twenty-foot equivalent units) in 2017 a new volume record.

Daniel Rose, Managing Director of APM Terminals Pecém said “We have been working closely with our shipping line customers and our landside customers to ensure they had the port service levels needed to grow their business. Pecém has the best port and hinterland infrastructure connectivity in the region. 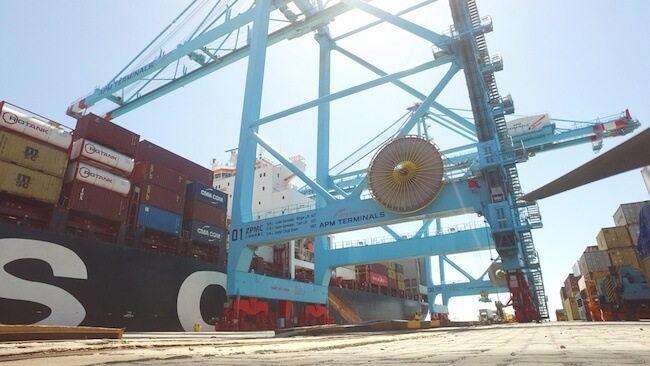 We offer the highest operational performance indexes in the market with consistent, reliable 70 BMPH (berth moves per hour) using our two new Ship to Shore (STS) cranes. In fact, our terminal productivity has doubled since the arrival of the STS cranes in 2016, averaging 33,6 moves per hour per crane. These numbers also attracted transshipment volumes – which tripled in 2017 compared to 2016.”

Pecém is the closest Brazilian port to the United States and Europe markets. This is a clear competitive advantage especially to the fruit business in Ceara and Rio Grande do Norte States. Fruits are accountable for around 20% of Pecém exports since its location enables a shorter transit time, ensuring better freshness on store shelves for the consumer. As a result, the terminal added new lines from MSC and Maersk Line focused on fruit exports to Europe during the 2nd half of 2017.