Costa Rica made its way onto the world port map. The inauguration of APM Terminals Moín will enable products to be shipped on transatlantic routes to European and Asian markets without transshipment. The Terminal will also move Costa Rica to number 1 for connectivity, out of 139 countries ranked by the World Economic Forum. 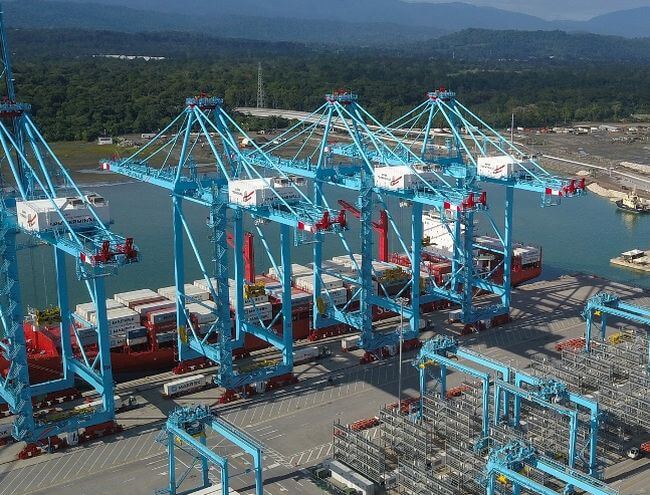 “At APM Terminals we partner with governments to become the best port operator in the world and Moín is a great example. Without any doubt, we are inaugurating today a new era in international and intra-regional trade in Central America,” said Morten H. Engelstoft, CEO of APM Terminals.

The project represents a total investment of USD 1 billion and is built on a 40-hectare artificial island. The terminal has a 650-meter long pier and a container yard with the capacity to hold 26,000 TEUs (Twenty-foot Equivalent Units), including power connection capacity for 3,800 refrigerated containers. Refrigeration is essential as Costa Rica is currently the world’s largest exporter of pineapples and third largest exporter of bananas.

“One of the goals of the Costa Rican Government is the job creation with a territoriality approach and, with this project that we are inaugurating today, the conditions of competitiveness and economic reactivation are being created for the province of Limón and also for the entire country, ” said Carlos Alvarado Quesada, President of the Republic of Costa Rica.

Impact on the economy

Moín starts operations with 650 employees, mostly trained thanks to an agreement with the National Institute of Learning (INA in Spanish). A socio-economic impact study, validated by the Central American Academy, highlights that the greatest potential lies in the generation of 147 thousand indirect jobs in the following decade nationwide.

APM Terminals will also make a contribution, with 7.5% of their net income being paid to the Board of Port Administration and Economic Development of the Caribbean (Japdeva, in Spanish). This will equate to approximately USD 20 million on an annual basis.

“We are proud that the country has trusted APM Terminals with the mission of developing and operating this amazing port. A concession that also brings socioeconomic opportunities to the community, the country and the region,” said Kenneth Waugh, Managing Director of APM Terminals Moin.

The region will attract a very high percentage of the ships that transit through the Panama Canal. The number of shipping routes that reach the Moín Container Terminal is projected to increase by as much as 285 percent.

In alignment with the company’s strong commitment to safety and security, the Terminal has the most modern scanner in Latin America for cargo inspections.

The six gantry cranes and the 29-yard cranes represent a USD 110 million investment and will allow the terminal to continuously perform an average of 180 movements per hour for loading and unloading.
These efficiency standards will significantly reduce vessel service times from 40 hours (average time in other docks) to just 15 hours.

APM Terminals trained a key team of operators and technicians at some of its other terminals with high container traffic in Egypt, Brazil and Morocco.