The berth extension now enables two x 8,000-10,000 TEU be safely and easily handled simultaneously. The quay extension was part of a $50 million Phase 3 expansion that increased terminal capacity and productivity at the 10-year old APM Terminals Mobile intermodal container complex at the Port of Mobile. 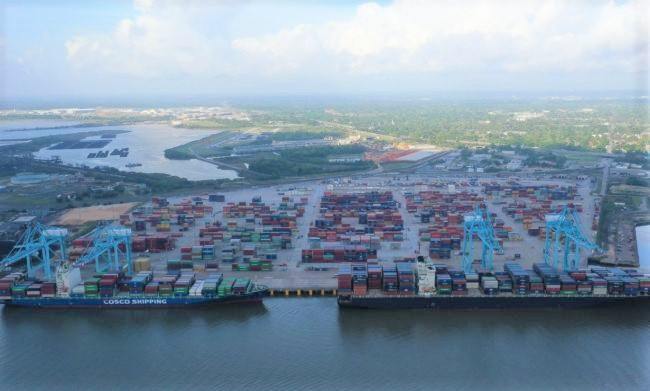 Prior $450 million investment
The APM Terminals Mobile Phase 3 modernization project complements prior investments by the Alabama State Port Authority and APM Terminals totaling $450 million in marine and rail container intermodal terminals. Investments to date will soon be enhanced by the recent U.S. Army Corps of Engineers issued permit and receipt of full federal and state funding to take the Mobile Harbor to -50 feet draft by 2024. Construction on the channel and harbor improvements is expected to begin later this year.

“We continue to seek out and implement innovation and world class infrastructure to meet the needs of our carriers and shippers,” said Jimmy Lyons, director and chief executive officer for the Alabama State Port Authority. “We’re very pleased with both carrier and shipper confidence in our program as they continue to introduce larger ships, add capacity and increase volumes through the Port.”

Flexibility to service vessels arriving outside of schedule
Brian Harold, Managing Director of APM Terminals Mobile said, “We are very excited to complete this project which allows us to offer a significant increase in berthing windows to our customers. This expansion also enables us to offer improved capabilities to quickly service vessels that may arrive ahead-of, or behind schedule.”

The new dock is also capable of housing more cranes – which allows more cranes to be added in the future. Other recent improvements include an expanded outbound gate (from four to six lanes) and an expanded Intermodal Rail Facility (by ten acres).

Across the street from the terminal, a nearly 300,000 square foot refrigerated warehouse facility, is being built by MCT Logistics and is aimed for completion later this year.

APM Terminals Mobile currently has four direct all-water weekly services from Asia, calling various Ports in China and Southeast Asia; three of them make direct calls in Busan as well. The facility handled 419,316 TEU in 2019. “Jimmy Lyons and the Alabama State Port Authority have been a great partner in growing the container volumes in the Port of Mobile.

Since the opening of the container terminal in 2008 we have consistently worked together on short and long-term commercial efforts, as well as the strategic development plans of the facility,” added Mr. Harold.