A new safety initiative at the world’s largest proprietary container terminal, APM Terminals Pier 400 Los Angeles, has resulted in the implementation of revised yard layout and procedures to enhance the safety of the 2,000 to 3,000 Over-the-Road (OTR) truck drivers who deliver and pick up containers at the terminal in any given 24-hour period. The goal of the program, introduced at a special OTR Safety Day last month at the terminal, is to reduce the risk of accident or injury to outside truck drivers with business at the Pier 400 facility, by keeping drivers inside of their truck cabs at all times within the terminal, or in specifically designated and protected areas where the drivers may exit their cabs to lock the pins which hold containers onto container chassis.

“Our intention is to continue to improve safety performance by increasing the separation between people and machines” said APM Terminals Pier 400 Los Angeles Managing Director, Steven Trombley, adding “Put simply: keep drivers in their truck cabs while inside the terminal, or provide them additional safeguards if this is unavoidable”. 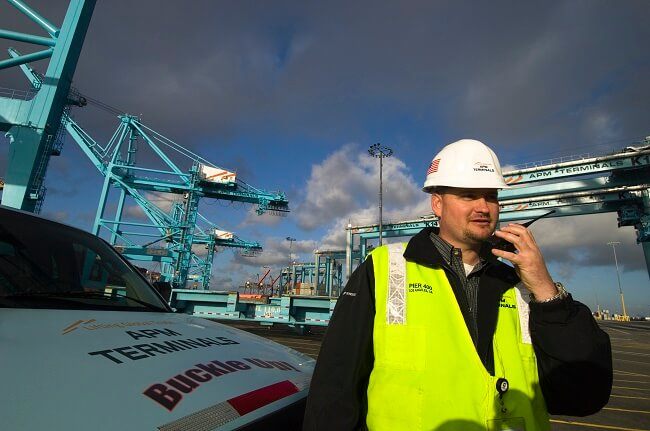 Four specific steps were taken to implement the new terminal safety procedures: the creation of designated areas for drivers to lock (after pick-up) or unlock (prior to delivery) the pins on chassis, away from the heavy container moving equipment in continuous operation in a modern container terminal; a redesigned area for truck driver parking to address gate transaction problems; and a redesigned Chassis Exchange area for improved safety during the pick-up and drop-off of empty container chassis. The Trucker Safety Day activities included APM Terminals Pier 400 Management Team members personally greeting every driver entering the facility on December 2nd, 2015, and presenting them with a Safety Message and Expectations, as well as a promotional item, and the hosting of a luncheon for local trucking organization leaders, along with managers and dispatchers. A Trucker Safety video, which will be required for all truck divers entering the facility, was also given an advance screening.

The arrival of the newest classes of Ultra-Large Container Ships (ULCS) of 10,000 TEU capacity and above at the world’s major container ports in the past two years has drawn new attention to the need for enhanced terminal safety procedures as terminal truck traffic and container handling activity increase in response to larger container volumes moving onto and off of the vessels while in port. On December 26th APM Terminals Pier 400 was the maiden US port call of the 18,000 TEU capacity-class CMA CGM Benjamin Franklin, the largest container ship to call at a North American port. During the vessel’s 56-hours of terminal operations 11,200 containers were handled. Earlier in 2015, in March, APM Terminals Pier 400 set another record as the first US port to accommodate three ULCS of 13,000-TEU class size simultaneously, with 34,465 container moves.