APM Terminals has signed a contract for the enlargement of 10 STS cranes, including the raising of the overall height, and extension of the crane boom,to accommodate Ultra-Large Container Ships (ULCS) of up to 20,000 TEU capacity. The contract was signed at a ceremony held at the APM Terminals Pier 400 Los Angeles facility,the world’s largest proprietary container terminal, by representatives of APM Terminals and Shanghai-based ZPMC, which has been selected to perform the crane modifications on the terminal’s existing Noell STS cranes. After the modifications designed by the original crane manufacturer, Terex-Noell, the 10 STS cranes will become the tallest in the USA.

“Following the very successful handling of the 18,000 TEU CMA CGM Benjamin Franklin at Pier 400 last December, the first call of a vessel of that size to any North American port, APM Terminals is continuing to lead the way with the infrastructure investment necessary to meet the needs of our customers, and the evolving requirements of American seaborne trade” said APM Terminals Los Angeles Managing Director Steve Trombley, who signed the contract on behalf of APM Terminals.

Another feature of the upgraded cranes will be the installation of Light Emitting Diode (LED) illumination, which will improve visibility,and accuracy of the cranes’ associated Optical Character Recognition (OCR) programs, as well as reducing energy use by 60% compared with the previous conventional lighting system. 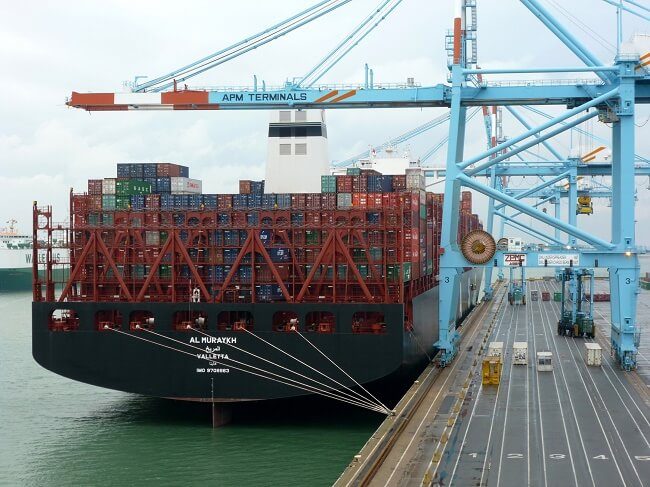 When the Benjamin Franklin arrived at Los Angeles in the last week of December 2015,containers were stacked seven levels-high on-deck, reducing the effective vessel capacity to 15,000 TEUs during that call. While docked at APM Terminals Pier 400 between the morning of Saturday, December 26th and the evening of Tuesday, December 29th approximately 1,500 longshoremen worked 56 hours to load and unload 11,229 containers (both 20’ and 40’), while employing a record nine STS cranes on the vessel at the same time. The previous record for the largest vessel to call the terminal prior to the Benjamin Franklin was the 15,000 TEU Maersk Edmondo, arriving only four days prior. More recently,Maersk Edmondo called Pier 400 again in April, with 10,893 moves performed in six shifts,with a crane productivity of 30.3 Gross Moves Per Hour (GMPH).

The largest vessels calling US West Coast ports at present are of the 12,000 to 13,000 TEU range, on the Far East/US West Coast services. No vessels of that size call the US East or Gulf Coasts, though the widening of the Panama Canal locks, officially opening this June, will permit vessels of this size to transit the canal for the first time. In 2013 the 12,500 TEU capacity MSC Fabiola was the first of the ULCS to call the US West Coast. While no ULCS of 18,000 TEU capacity and above are in regular service to US West Coast, some carriers have expressed an interest in deploying these vessels as space demand improves.There are currently 37 ULCS of 18,000 TEU or more capacity in service in the global fleet,with another 72 vessels of between 18,000 and 21,000 TEU capacity on order.

At 484 acres, APM Terminals Pier 400, which opened in 2002, is the largest single proprietary terminal in the world. The 65-acre on-dock rail facility, including intermodal yard and storage tracks, and five miles of working track can accommodate four doublestack trains simultaneously. Throughput was 2.48 million TEUs in 2015, with the facility ranking 1st in the JOC productivity study among North American terminals at 92 MPH with a vessel alongside in 2014.