The Moín Container Terminal (MCT), operated by APM Terminals, completed its first year of operations on February 28. During the year the terminal serviced more than 1,100 ships, around 1.2 million TEUs and achieved important improvements in productivity, sustainability and the training of 1,000 employees from the province of Limón.

“During this time, we’ve reached very important milestones, such as the opening of new direct trade routes, increased port efficiency, the steady improvement of direct services from Limón to China and the attraction of ships with greater capacity,” highlighted Hartmut Goeritz, Managing Director of APM Terminals Moín. “This was all made possible by the execution of our implementation plan and the efforts of all of our employees”

During its first year of operations, APM Terminals Moin has become one of the most productive terminals in Latin America, with performance is comparable to or even better than ports in Europe and the United States. 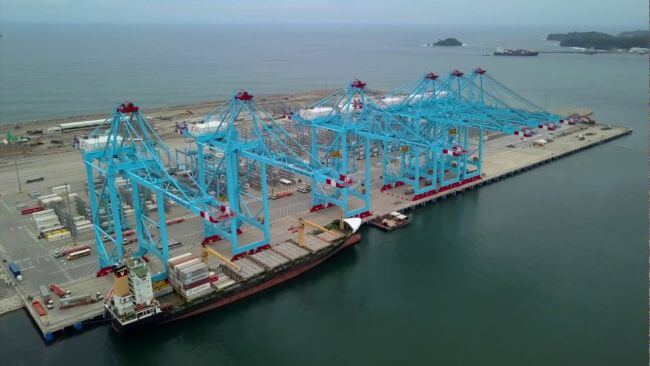 The company has reduced berthing time from 30 hours to just 10, with no waiting times in bay. On average, the Terminal performs 26 moves-per-hour per crane, results that surpass other terminals in Latin America with similar infrastructure and more years of experience.

Increased productivity has not come at the cost of safety. APM Terminals Moín works with a safety program focused on the top five causes of incidents in the port industry: transportation, working at heights, suspended loads & lifting, stored energy and control of contractors, to maintain an outstanding track-record in this area.

“In the short term our focus is on further increasing these productivity levels, which already exceeded our contractual obligations, and working hand-in-hand with our customers and authorities to continue simplifying, through digitization, foreign trade processes, an area where we see an important opportunity,” added Goeritz.

Furthermore, the company is focused on maximizing the use of its artificial island and support infrastructure, to provide other added value services, which will provide significant savings in the cost of transport and logistics.

The artificial Island that the company built in the Caribbean, with an investment of a billion dollars, was the biggest and most important infrastructure project in the country’s history.

The next phase of expansion will commence when the MCT reaches an annual volume of 1.5 million TEUs. This is projected to be achieved within a period of 4 to 6 years, as determined by the market.

“APM Terminals is committed to Costa Rica and Latin America because they believe in the value of their location as a strategic point for the import and export of products, such as pineapples, where Costa Rica is a world leader. But, without the expansion of highway 32 and the consequent connections with Panama and Nicaragua, the Terminal alone will not be able to offer all the benefits that the country laid out in their master plan to become a logistical Hub,” added Leo Huisman, Head of Latin America Portfolio.

The MCT has generated 1,000 new jobs, with more than 95% of these employees from the province of Limón. This has provided great stability for the company, as the majority have remained working with them from the start.

As of January of 2020, APM Terminals has provided $16 million dollars as part of the Canon concession fee to Japdeva for the implementation of development projects in the province.

The company’s social responsibility program called The Caribbean Can!, has worked on several projects with the local police (Fuerza Pública), the Ministry of Education (MEP), Earth University, the Food Bank, and others.

Initiatives include working with the Tropical Scientific Center and the Local Police to protect Baula Turtles. So far, it has succeeded in liberating more than 50,000 turtles, beating the regional records. Another intiative, is the One Laptop per Kid program with the School of Moin and the Ministry of Education, which has given each student the opportunity to work with a portable computer device. Closer to home, the company has developed a program called I’m APM, which aims to improve the quality of life for employees.