A fire that broke out on a giant Liberian flagged container vessel, the APL Austria while sailing west off the eastern ocean of South Africa on Sunday has been contained, but its situation is still being closely monitored, the South African Maritime Safety Authority (SAMSA) reported on Tuesday.

The 71 867 tons, 280 meter-wide container carrier on which fire broke out in one of its cargo holds on Sunday afternoon while sailing 30 nautical miles south-west of Cape St Francis – some 50-70 kilometers west of the city of Port Elizabeth – had to be diverted back to the port of Ngqurha on Sunday night in order for rescue operations including firefighting to be conducted. 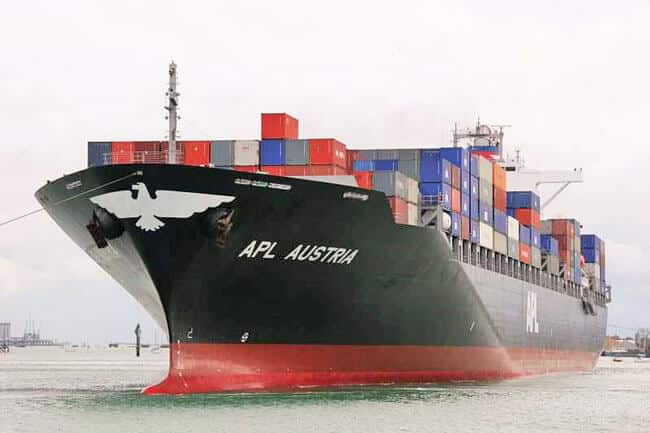 With the crew evacuated – an operation overseen by the SAMSA Maritime Rescue Coordinating Centre (MRCC) based in Cape Town, throughout Sunday night, Monday and early Tuesday, firefighters both on board and outside the vessel, inclusive of tugs from the Transnet National Ports Authority (TNPA) battled the fire, while efforts were made to remove some of the cargo on board to safety.

On Tuesday afternoon, SAMSA Centre for Shipping Executive Head, Captain Nigel Campbell reported that the battle against the blaze was being won progressively.

“It appears that the fire in the hold has been extinguished but the space has not been deemed safe to enter as yet. There are still smouldering containers on deck which are being fought by the fire brigade, a harbour tug is providing boundary cooling. Containers with hazardous cargo are being removed from the area around the fire,” said Captain Campbell.

He added that: “The Joint Operations Committee sits shortly to monitor progress against the plan.”