A new record was set in the Deurganck dock in the port of Antwerp Friday morning, June 9, when the Madrid Maersk moored there for the first time. With a length of 399 metres and a capacity of 20,568 TEU it is the largest container ship ever to call at the port. The Madrid Maersk remained in Antwerp until Sunday, June 11, 2017. During its stay 300 dockers worked non-stop to load and unload 7,000 containers. After the call in Antwerp the ship, which forms part of the Maersk Line’s AE2 service, will set sail for Rotterdam.

The Madrid Maersk belongs to the second generation of Triple-E ships operated by the Danish shipping company Maersk Line. In comparison with the first generation of Triple-E ships, these giant container carriers can take up to 2,000 more containers. Thanks to among other things a system for recovering waste heat on board, the shipping company has managed to further reduce CO2 emissions with this generation of ships. The second generation consists of a series of 11 ships, of which the Madrid Maersk is the first to enter service. These ships will eventually replace the older, less efficient vessels. 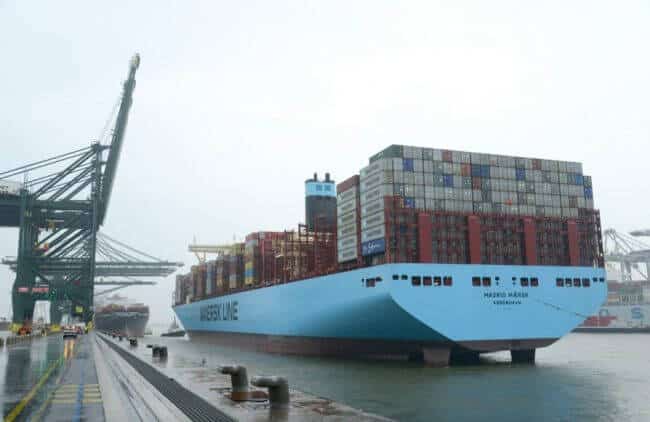 The Madrid Maersk left the Daewoo Shipbuilding & Marine Engineering yard in South Korea in spring this year, after which it began its maiden trip. It first called at the port of Tianjin in China on 27 April. The ship commanded by the Danish captain Niels P.H. Larsen and with a 24-man crew then called at other ports in the Far East, and finally sailed up the Scheldt to Antwerp on Friday morning, mooring in the Deurganck dock at around 0900 hours.

In Antwerp a good 7,000 moves will be carried out on board the ship. Three hundred dockers will work non-stop to unload 3,000 containers from the ship and load another 4,000 on board. But not alone the dockers are hard at work whenever such a giant container carrier calls at Antwerp. The number of people working in and around the port to pilot the ship in, load and unload the containers, transport them to their destination, empty and process their contents etc. comes to around 1,900 per call.

“Containers are much more than metal boxes for the goods that we like to find in our supermarkets,” says port alderman Marc Van Peel. “They form an undeniable source of employment, not only in Antwerp and the Waasland port area but also far beyond the borders of the Province of Antwerp. For these and other reasons it is crucial for our port to ensure that it has the additional capacity for handling containers, because more containers means more jobs for Flanders.”

Antwerp and the deepening of the Scheldt

It was exactly 50 years ago that the first container carrier arrived at Antwerp, when the Atlantic Span took two weeks to load and unload 700 containers in September 1967. Since then the container ships have grown ever larger, with record after record being broken. Thanks to the deepening of the Scheldt, which ensured the necessary draught at certain crucial places in the river from 2010 onwards, Antwerp has managed to keep pace with the increase in the scale of shipping. From January to May this year 68 container carriers in the category 14,000 to 18,000 TEU have already called at Antwerp. In the +18,000 TEU category the counter stands at 43 after the first five months of 2017.