The Japanese Bulk carrier that caused the oil spill off the coast of Mauritius had reportedly cleared the annual inspection in March, as said by Japanese ClassNK.

The ship has raised large scale alarms in all countries in the Indian Ocean Region(IOR) after running into a reef in Mauritius.

MV Wakashio is owned by Japan’s Nagashiki Shipping. MOL operates the ship, which bears the flag of Panama.

Multitudes of photos have been released by the government of Mauritius which showcases the 1,000-tonne oil spill across the aesthetic blue background of the Indian Ocean. 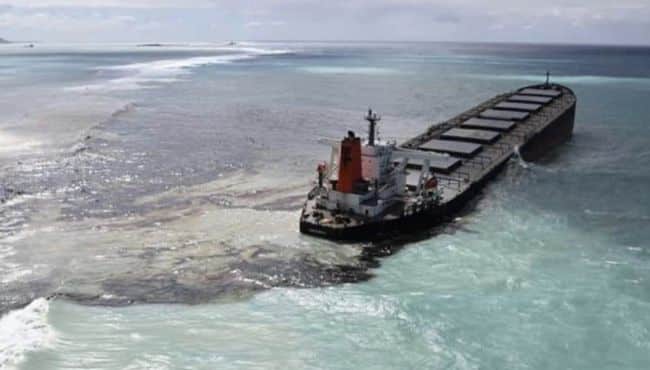 Mauritius went into a state of emergency due to the oil spill, with a declaration by the Prime Minister Pravind Jugnauth in preparation for “a worst-case scenario”.

In a statement, Mitsui OSK said on Tuesday, “We will do our utmost towards resolving the situation quickly.”

The ship, believed to have been carrying 4,000 tonnes of fuel oil, ran aground on a coral reef on 25 July.

The PM also confirmed that pumping out all the oil from the ship has been completed, adding that it was a ‘race against time’ before the ship would start to break apart.

The IMO has joined in on efforts to prevent any further large scale oil spill into the reef, assisting the process technology as well as with other U.N bodies in the region.