The Australian Maritime Safety Authority (AMSA) is coordinating a multi-national search and rescue response after being notified of injured solo yachtsman Abhilash Tomy.

Tomy was participating in the Golden Globe Yacht Race. On Friday night race organisers notified AMSA that one of the competing yachts had rolled in rough weather and dismasted. The solo yachtsman sent a message via a tracker that he had injured his back in the rollover and was unable to move.

The yacht is approximately 3,500 km west of Perth, in remote seas and in bad weather. 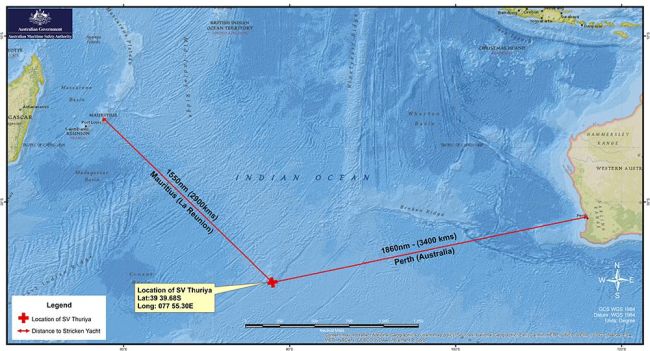 Having initially communicated with race officials via his text message from his tracker, the yachtsman activated his distress beacon at midday Saturday AEST to help rescuers locate him.

AMSA tasked a Royal Australian Air Force P-8A Poseidon aircraft and a civilian Global Express aircraft from Australia. The Indian Armed Forces are supporting the search with an additional P-8 aircraft. These aircraft sighted the stricken yacht SV Thuriya yesterday and confirmed the vessel’s condition and location for rescue organisers.

AMSA has tasked a French fisheries patrol vessel, FPV Osiris to respond, which is expected to arrive on scene later today. Royal Australian Navy vessel HMAS Ballarat has also been tasked, but will take several days to reach the stricken yacht.