Petty Officer Kelly was recognized for his courage, perseverance and skill in rescuing four survivors from a life raft from a sinking fishing vessel, in extremely high winds, battling huge waves to swim to rescue each survivor and get them winched to safety. 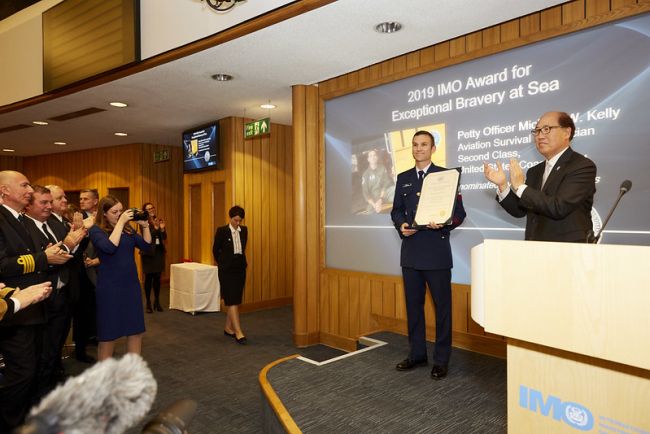 Accepting the award, Petty Officer Kelly said it was an immeasurable honour and truly humbling to be recognised by the International Maritime Organization (IMO), the global organization that sets the standards for maritime safety and security. He acknowledged the teamwork involved in the rescue.

“I would not be here if it was not for the amazing skills of my crew. Their precision and focus allowed me to act as a tiny cog in the large process of search and rescue, that we are all so passionate about and train for daily,” Mr. Kelly said. “There is nothing more precious than human life and we all strive to go home to the ones we love.”

On 14 November 2018, during heavy storms, the crew of the rescue helicopter CG6032 was directed to provide assistance to the sinking fishing vessel Aaron and Melissa II. The vessel’s four crew members were abandoning ship in very severe weather conditions, 70 miles off the Coast of Maine, United States.

After taking off, the helicopter crew immediately encountered very strong turbulence and gusts up to 60 knots. Arriving on scene, the aircrew located a life raft, battered by raging seas.

AST2 Michael Kelly was immediately deployed into the cold water. Battling 20-foot waves and chasing the raft, which was constantly being blown away by 50-knot winds, he finally managed to reach the anchor line and pull himself to the life raft.

It was a critical situation, with all four survivors suffering from hypothermia. Two were unable to swim, while the flooded raft was in danger of capsizing. With great strength and stamina, AST2 Michael Kelly pulled each survivor from the raft, one by one, swimming strongly through the storm to keep them afloat. Each was lifted into the swaying rescue basket to be hoisted to safety.

After each rescue, AST2 Kelly was forced to regain lost ground, as the heavy winds continued to push the raft further away. He fought through extreme weather conditions, as well as physical and mental exhaustion, to save the lives of four seafarers in distress.

The IMO Council in July agreed with a panel of judges that AST2 Kelly demonstrated truly exceptional bravery and determination.

During the award ceremony, four certificates of commendation were also presented:

Mr. Wang Hongwei, Maritime Councillor at the Embassy of the People’s Republic of China in London, received the certificate on their behalf.

Captain Mioc Zeljko was at the ceremony to receive the certificate

Captain William Boyce was at the ceremony to receive the certificate.

Letters of commendation have been sent to:

This annual award was established by IMO to provide international recognition for those who, at the risk of losing their own life, perform acts of exceptional bravery in attempting to save life at sea or in attempting to prevent or mitigate damage to the marine environment. Such acts of bravery may also involve extraordinary seamanship skills in very difficult conditions or any other display of outstanding courage.

Nominations are scrutinized by an assessment panel made up of members of non‑governmental organizations in consultative status with IMO, under the chair of the Secretary-General. Subsequently, a panel of judges (made up of the Chairs of several IMO bodies) considers the recommendations of the Assessment Panel and selects the recipient.