The Navy’s famous sailing vessel “Mhadei” set sail from Visakhapatnam for her home port, Goa, after participating in the International Fleet Review. Unique to this seemingly normal voyage was that she was skippered and crewed by an all-women crew of Naval officers for the very first time. Lieutenant Commander Vartika Joshi, a Naval Architect, was appointed as the first woman Skipper of Mhadei on 08 Feb 16 just prior to the return voyage. Mhadei is crewed by Lieutenant P Swathi, Lieutenant Pratibha Jamwal (Air Traffic Control specialists), Lieutenant Vijaya Devi and Sub Lieutenant Payal Gupta (both Education officers). The sixth member of the crew, Lieutenant B Aishwarya is a naval architect and is expected to join the boat shortly.

These women officers are training to form an all-women crew that would attempt to circumnavigate the Globe in 2017. To prepare themselves for the arduous voyage, they have undergone theoretical training in Navigation, Communication, Seamanship and Meteorology at the Navy’s various Training Establishments based at Kochi in August last year. Since then, the officers have been training under the guidance and watchful eyes of Cdr Dilip Donde. Cdr Donde was the first Indian to solo-circumnavigate the globe in 2009-10 on board the same boat, Mhadei. The rigorous training included sorties of various durations with Cdr Donde as well as working on the boat and training on the equipment fitted on board. The officers sailed for the Fleet Review along with Cdr Donde and post the IFR, the Navy decided to appoint Lt Cdr Vartika Joshi as the Skipper for the return journey. 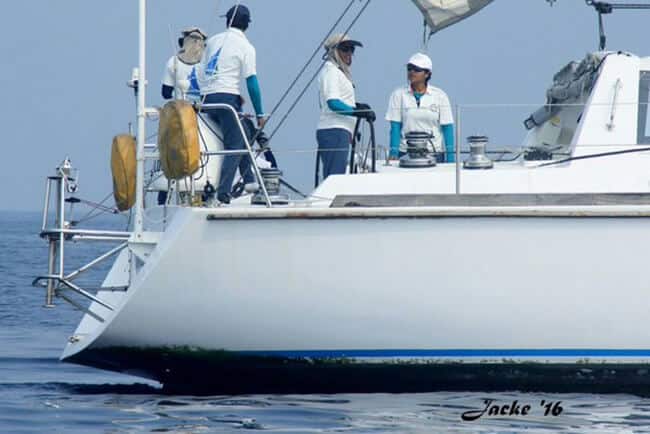 Mhadei visited the Ports of Chennai (12-19 Feb) and Kochi (27 Feb-02 Mar) on her return journey. She returned to her homeport Goa today which coincidentally happens to beInternational Women’s Day. Future training plans include an independent voyage to Mauritius in May 2016. The officers would shift to a new boat of the same class as Mhadei that has been ordered by the Navy on M/s Aquarius Shipyard, Goa slated for delivery in Feb 2017. Mhadei and her yet to named sister are both completely made in India.

During the maiden voyage by these gritty and adventurous women officers of the Navy, Mhadei and her crew encountered moderately rough weather and heavy seas in the Gulf of Mannar. The present Skipper, Lt Cdr Vartika Joshi, was part of the crew on board Mhadei for the return leg of the Cape to Rio race in 2013-14. Lt Swathi was also part of the crew for the return leg of the boat from Cape to Goa. This is the first all women crew ocean-going sailing boat of the Navy. All the crew members are volunteers and are driven by their passion for adventure and a love for sailing and the seas.