You are here: Home › Shipping News › All Crew Kidnappings In 2018 Occurred In Gulf Of Guinea – ICC IMB Report
TwitterFacebookLinkedInPinterestBuffer

The second quarterly report from the ICC International Maritime Bureau (IMB) shows that all 2018 crew kidnappings have so far occurred in the Gulf of Guinea in six separate incidents. A total of 107 incidents were reported to the IMB Piracy Reporting Centre (PRC) in the first six months of 2018. In total, 69 vessels were boarded, with 23 attempted attacks, 11 vessels fired upon and four vessels hijacked. No vessels were reported as hijacked in the second quarter. 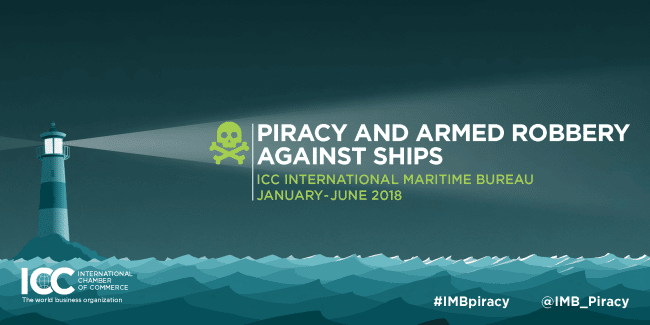 Moreover, the true number of incidents in the Gulf of Guinea is believed to be “significantly higher” than what is reported to the IMB PRC, says the report. Pottengal Mukundan, Director of IMB, said: “The 2018 figures aptly demonstrate the value of timely and transparent reporting. The reports help to focus on risk areas, and to accurately inform vessels of evolving dangers and allow authorities to deliver an effective response.” 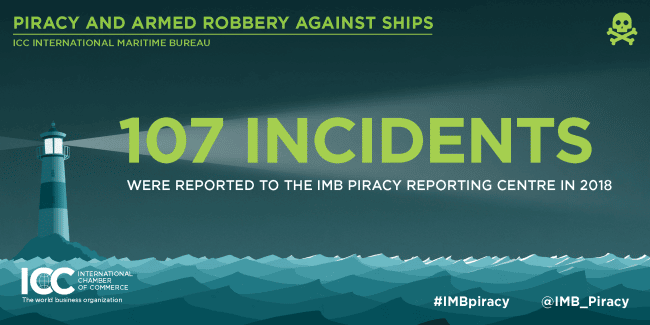 Fewer incidents in the Philippines and off Somalia

Outside the Gulf of Guinea, the number of 2018 incidents decreased in other piracy hotspots. There were no reported incidents recorded off the coast of Somalia in the second quarter of 2018. Masters are however again urged to continue to maintain high levels of vigilance when transiting the high-risk area and to follow the latest version of the best management practices. 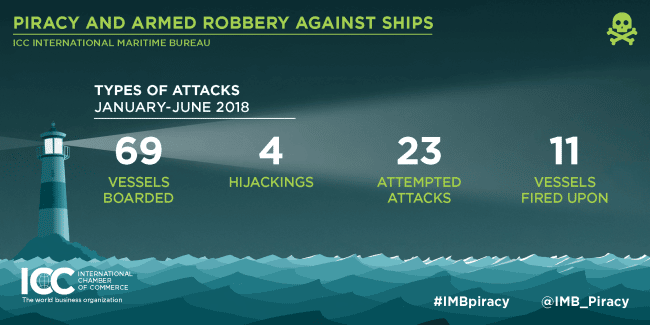 The number of incidents in the Philippines dropped from 13 by the second quarter of 2017 to three in the same time period this year. 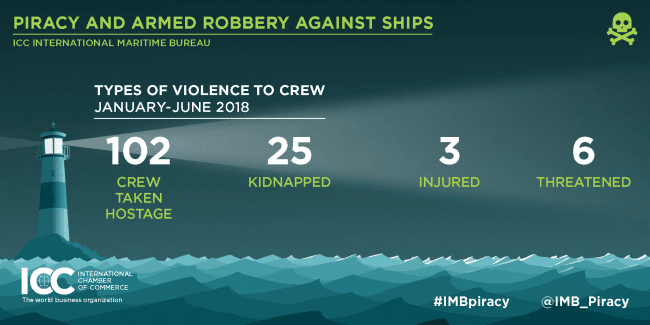 The Malaysian Maritime Enforcement Agency (MMEA) is commended for the prompt and successful boarding of a product tanker which was under attack by armed robbers around six nautical miles East off Pulau Tinggi, Malaysia. Fourteen robbers were detained for investigation and two were arrested in Indonesia by Indonesian Enforcement authorities. 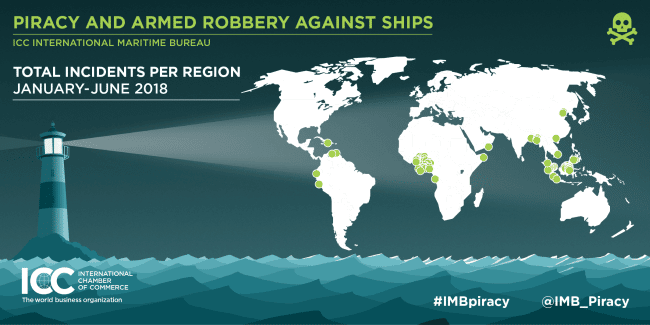 Since 1991 the IMB PRC’s 24-hour manned centre has provided the maritime industry, governments and response agencies with timely and transparent data on piracy and armed robbery incidents – received directly from the Master of the vessel or its owners. 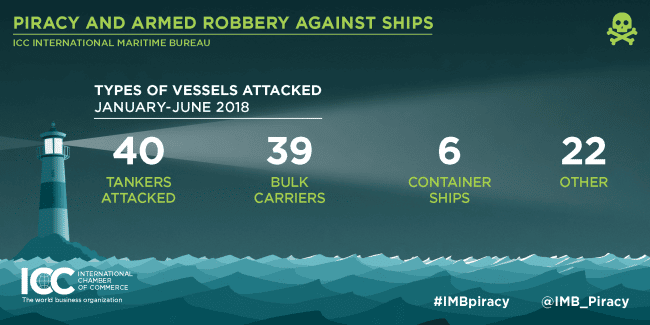 The IMB PRC’s prompt forwarding of reports and liaison with response agencies, its broadcasts to shipping via Inmarsat Safety Net Services and email alerts to CSOs, all provided free of cost, has helped the response against piracy and armed robbery and the security of seafarers, globally. IMB strongly urges all shipmasters and owners to report all actual, attempted and suspected piracy and armed robbery incidents to the IMB PRC. This first step in the response chain is vital to ensuring that adequate resources are allocated by authorities to tackle piracy. Transparent statistics from an independent, non-political, international organization can act as a catalyst to achieve this goal.