Alfa Laval FlowSync is an automatic control system that synchronizes the oil feed to Alfa Laval separators with the engine load. By matching the flow of fuel to the engine’s needs, it increases retention time in the separator bowl, giving the separators the best possible conditions for doing their job. As the only system of its kind that can steer multiple separator feeds simultaneously, FlowSync can optimize the entire fuel cleaning process for the best protection and energy efficiency. 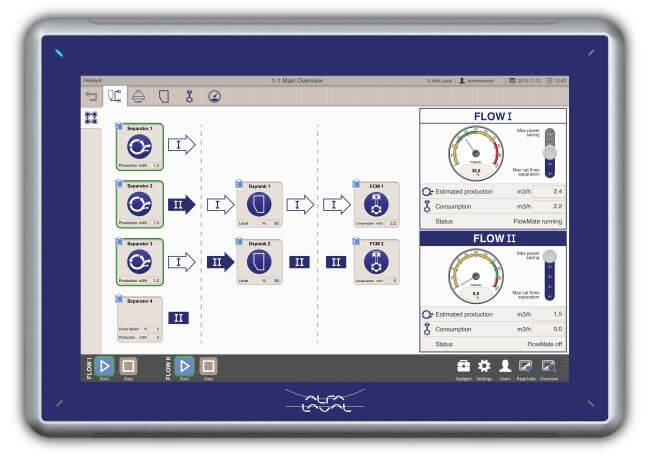 To increase the effectiveness of centrifugal separation, which remains the best defence against cat fine attacks, FlowSync takes fuller advantage of slow steaming. While slow steaming today is beneficial overall, it makes ineffective use of the fuel system layout.

“Since most vessels use fixed-speed feed pumps, they experience a large overflow of separated fuel when slow steaming,” Englund explains. “At partial loads the unconsumed fuel is returned to the settling tank, only to be pumped and separated again. Unfortunately, the resulting improvement in cat fine content is negligible.”

When FlowSync is used, the fixed-speed pumps are replaced with variable-speed pumps. These are steered automatically by FlowSync, which matches their throughput to the engine load with an ample margin of safety. “Automatic control is integral to achieving full benefit from the investment,” says Englund. “Because the crew is not always alert to changes in engine load, manually controlled variable-speed pumps tend not to be adjusted.”

With FlowSync adjusting the separator feed rate, there is a very positive impact on separation efficiency. As the flow rate decreases, the fuel is allowed to spend more time in the separator bowl, which increases the separator’s ability to remove smaller and lighter particles. Though a properly operated separator removes nearly all cat fines larger than 10 µm, cat fines smaller than 3 µm are substantially more difficult.

“Increasing retention time in the bowl lets the separator remove the most stubborn particles,” says Englund. “Even the tiniest cat fines can cause significant wear and damage if they become trapped between the piston ring and cylinder liner.”

For energy efficiency as well, FlowSync has major benefits. Because the feed rate is matched to the fuel consumption, there is minimal overflow from the day tank back to the settling tank – and no re-pumping of previously separated fuel. This in itself means energy saved.

A still greater amount is saved in the separator, where energy is used to accelerate the fuel, drive it through the disc stack and finally pump it out again. A separator consumes around 1 kWh per cubic metre of separated fuel, which means savings of 1 kWh for every cubic metre of reduction with FlowSync.

One system for all separator feeds

Unlike other flow optimization systems, FlowSync is a single control system for multiple feed pumps and the entire fuel flow. It allows optimization of the whole cleaning process, even when there are multiple lines of separators and tanks. Via the intuitive Alfa Laval Touch Control panel, users can choose to run more separators at reduced flow for maximum separation efficiency, or fewer separators at reduced flow for maximum energy savings.

“FlowSync is a triple win, combining increased separation efficiency with energy efficiency in pumping and separation,” says Englund. “But the biggest win is for ship owners and operators, who can achieve these benefits with a small investment and minimal effort from the crew.”