ALE has completed another world record with the load-out of the 47,830t Arkutun Dagi topside. This weight, which was the combination of the 42,695t topside positioned on a 5,135t load-out support frame is the heaviest to be loaded-out in the world.

The topside will be located in the Arkutun Dagi field off the east coast of Russia; the development is expected to be the largest oil and gas production platform in Russia where the first oil is scheduled to be produced within the next 12 months.

ALE’s full scope of work included the stand jack pulling, high capacity modular ballast system and precision 3D barge monitoring. In addition to this, ALE also supplied the full engineering scope and supervision of the overall load-out. Due to the record weight, the working tolerances of the barge were much smaller than during a conventional load-out.

The high capacity modular ballast system is adapted for each barge – the bespoke system for this project included 2400 Cu M / Hr ballast pumps. This enabled the ballast pump and power pack operation to be completed from one central control by using a computerised PLC control. The computer system provides, tank sounding, flow rates, tidal monitoring and HPU control. This innovative system also allows the flow distribution for the barge to be controlled with a click of a mouse. 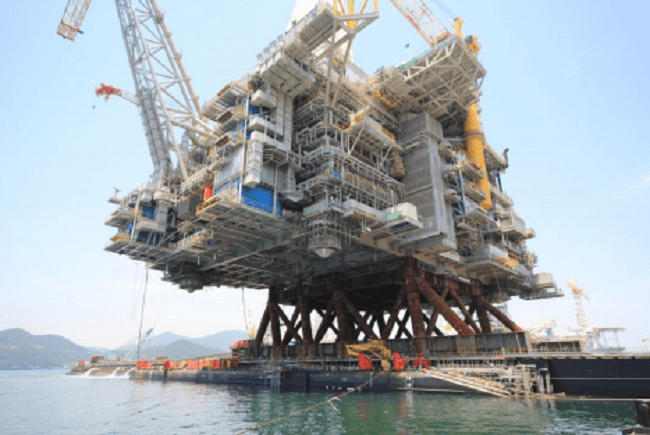 Russ Jones General Manager for ALE – Offshore Services stated “Working on such a prestigious project really shows how ALE are leading the way with technology. When you are working to such tight tolerances, technology and experience really are the key to success. The precision barge level monitoring system was developed in-house and gives you the comfort factor when you are out there working in the project, knowing the accuracy
and reliability of the system allows ALE to push the boundaries and make such projects possible’.

This load-out was the final stage of the project that saw ALE complete the heaviest jack-up in the world. The topside, then weighing 42,780t due to additional steelwork, was jacked to a height of 24 metres. This jack-up operation was a first of a kind project for ALE’s Mega Jack system. To complete this stage of the project, the Mega Jack was configured in four sets of towers each made of a combination of three singular towers; this gave each of the four towers capacity of 15,000te and an overall jacking capacity of 60,000te. The Mega Jack is a completely computerised and stroke controlled system operated via a control room; it took only 11 hours to complete the lift.

Kees Kompier Executive Director at ALE said: “This pioneering project is a great achievement for ALE. It clearly demonstrates the strength of ALE’s global capabilities that we are able to jack-up a weight of 47,830t to a height of 24 metres in 11 hours and then load-out a final weight of 48,000t. These are statistics that the industry haven’t been able to witness before and shows that we are now making the impossible possible”