ALE has completed the load-in of the Sewol ferry using a record-breaking number of SPMTs, as part of a complex salvage operation in the East China Sea in April. At 17,000t, this is the heaviest piece ever to be transported by SPMTs.

ALE, one of the global leaders in heavy lifting and transportation, was contracted to perform the load-in operations of the high-profile ferry, which tragically capsized two years ago. 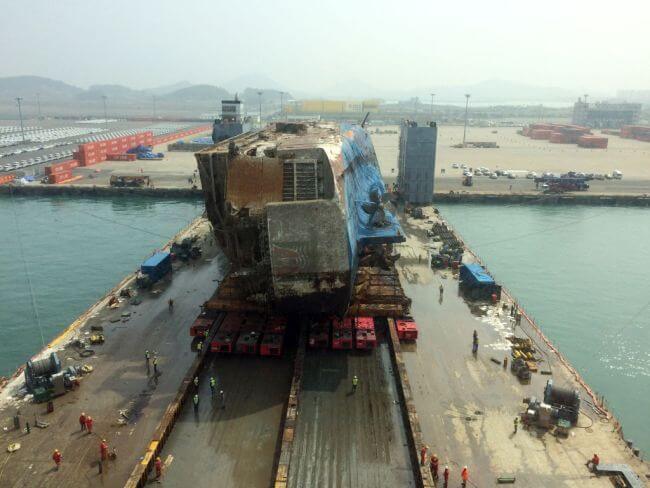 The operation was followed on-site by the families of the victims and the Korean Government, generating additional pressure on the ALE site team.

Although the ferry was estimated to weigh between 11,000t and 13,000t, the client faced the challenge of moving a ferry in which there was no way of confirming the actual weight and CoG position until it was lifted from the sea and positioned onto the barge. 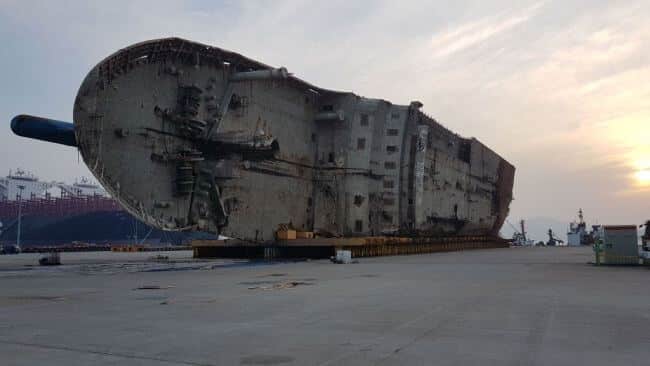 After the arrival at the load-in location, it was discovered that a significant amount of mud remained inside the vessel, that increased the weight by 4,000t. Based on the results of the first load transfer test with SPMTs, the ferry was later calculated to weigh approximately 17,000t and, as a result, ALE had to re-engineer a load-out solution by their site engineering team which resulted in an increase in the amount of axles from 456 to 600 axle lines at short notice.

Within 24 hours ALE had mobilised the additional 144 axle lines to receive the semi-submersible vessel from the barge onto 600 axle lines of SPMT, in a configuration of 6 x 2 file 80 plus 2 x 2 file 60.

“This was an extremely strategic project, not only for ALE’s South East Asia region, but for the entire ALE group. Despite the short notice for mobilisation, the complete load-in operation was controlled by ALE, included the engineering and project management,” explained Roberto Radicella, General Manager of ALE’s Malaysia branch.

Energy Efficiency In Shipping – Why It Matters!