Matson, Inc., a leading U.S. carrier in the Pacific, took delivery of a new 65-ton gantry crane to replace one half its size at the company’s Kodiak Terminal.

Standing more than 340 feet tall at its peak with a boom spanning 164 feet, Matson’s new crane is the largest in Alaska, capable of lifting loads up to 60 feet long and weighing up to 145,000 pounds.

Its state-of-the-art industrial equipment will be powered entirely by renewable energy.  An electrically powered crane that uses fly wheel technology to capture, store and then return power as needed, the crane will run on electricity provided by the Kodiak Electric Association, which uses wind and water turbines to generate 99.9 percent of its power.  (See the technology in action here:  ABB to enable integration of renewables in Alaskan island microgrid; Alaskan island goes green with ABB technology – YouTube ) 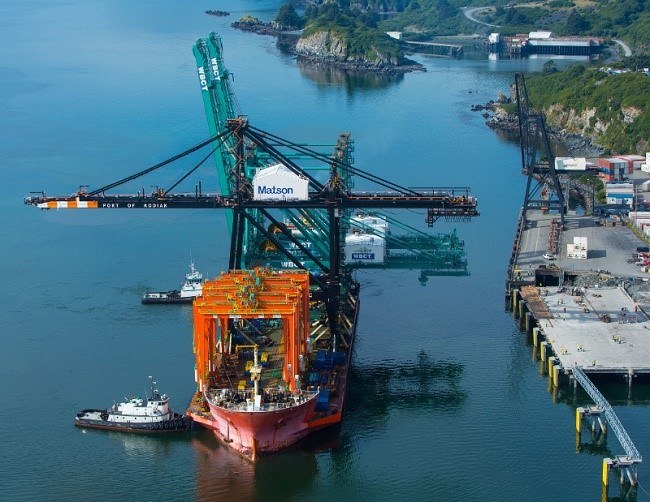 With a price tag of more than $10 million, the new crane is one of a number of investments Matson is making to improve the services and capabilities of its Alaska operations.  It has also purchased new ground equipment and ordered a fleet of new dry and insulated containers for use in Alaska.

Matson has also scheduled work to install new exhaust scrubber systems on the three former Horizon D7 Class vessels it now operates in Alaska, with each vessel going into dry dock for three months, one after another, starting in September.

Matson, Inc. closed its acquisition of Horizon Lines, Inc., which included Horizon’s Alaska operations and the assumption of all non-Hawaii business, for $469 million (before transaction costs) on May 29, 2015.

In 2014, Matson was rated the #1 ocean carrier in the world in Logistics Management’s annual Quest for Quality Awards, considered by many the most prestigious industry award recognizing performance excellence and customer satisfaction.