Ship from company’s AIDA Cruises brand, the leading cruise line in Germany, is world’s first cruise ship that can be powered at sea and in port by liquefied natural gas (LNG) and refuels with the cleanest burning fossil fuel through partnership with Shell

Carnival Corporation & plc, the world’s largest leisure travel company, yesterday celebrated the start of its operation of the Santa Cruz de Tenerife Cruise Terminal in the Canary Islands with the maiden call of AIDAnova. The newest ship from Carnival Corporation’s AIDA Cruises brand, Germany’s leading cruise line, AIDAnova is the world’s first cruise vessel to be powered at sea and in port by liquefied natural gas (LNG), the world’s cleanest burning fossil fuel.

In advance of today’s celebration, Carnival Corporation recently announced an agreement with the Port Authority of Santa Cruz de Tenerife to be the first concession-holder to operate the Canary Islands’ and Mid Atlantic´s newest cruise terminal. 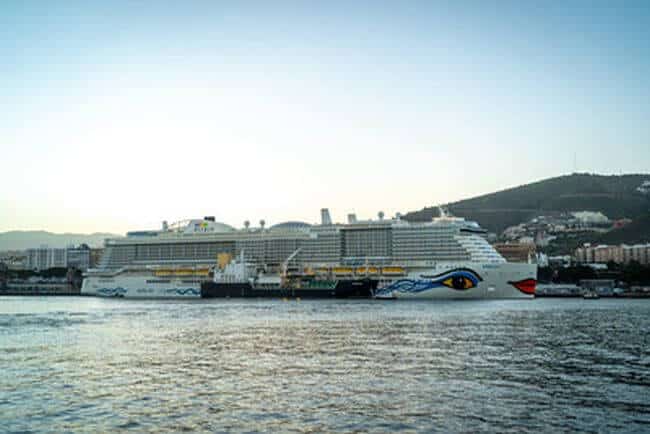 Directly following the arrival of AIDAnova on the afternoon of Dec. 18, AIDA Cruises’ president, Felix Eichhorn, welcomed Fernando Clavijo Batlle, president of the Canary Islands, and Pedro Suárez López de Vergara, president of the Port Authority of Santa Cruz de Tenerife as one of the first guests on board to participate in the cruise industry’s traditional plaque exchange, marking a ship’s first visit to a port.

“We are looking forward to a successful premiere season in the Canary Islands,” said Eichhorn. “AIDAnova is a milestone for our company and the entire cruise industry by offering entirely new vacation experiences. With our new ship, we will contribute to further economic growth of the local tourism and maritime industry. With an extraordinary variety of individual vacation options on board and ashore, we are providing new and exciting reasons for people to enjoy a cruise vacation, one of the vacation industry’s fastest-growing sectors. Furthermore, with our pioneering LNG technology, we start a new era of even more environmentally friendly cruising.”

The new Santa Cruz de Tenerife Cruise Terminal concession in the Canary Islands operated by Carnival Corporation offers passengers a comfortable experience and modern conveniences, and can accommodate next-generation “green” cruise ships powered by LNG, including AIDAnova. The first LNG supply for AIDAnova at the port took place upon its arrival, made possible by a supply agreement signed in 2016 between Carnival Corporation and Shell Western LNG B.V. (Shell) to contribute to a robust and reliable LNG fuel supply chain.

“We at Carnival Corporation are strongly committed to leading the way in the implementation of innovations to help protect the environment and support the UN Sustainable Development Goals, and we are proud to be on the forefront of advancing LNG as a fuel source for the cruise industry,” said Tom Strang, senior vice president of maritime affairs for Carnival Corporation. “One of the keys to establishing LNG as an industry standard for powering cruise ships is building an extensive, safe and reliable infrastructure for the fuel across the globe, and we look forward to working closely with Shell to support that effort. The first LNG supply of AIDAnova here in the Canary Islands, only achieved with the active support of the local port authorities, is the start of building a strong foundation for the future of LNG fuel supply for cruise ships across the globe.”

In total, following AIDAnova, Carnival Corporation has an additional 10 next-generation “green” cruise ships on order that will be powered by LNG in port and at sea, with expected delivery dates between 2019 and 2025, leading the cruise industry’s use of LNG to power cruise ships.

“We are proud to be supplying LNG for the world’s first LNG-powered cruise ship,” said Tahir Faruqui, general manager, Shell global downstream LNG. “This milestone is a further demonstration of our strength in providing the expertise and infrastructure required to encourage greater use of lower emissions fuels in marine transport. Carnival Corporation has led by example and put itself at the forefront of the sector by using LNG. We look forward to continuing to work closely with the industry to demonstrate a robust and reliable LNG fuel supply chain in the years to come.”

AIDAnova today welcomed its inaugural guests in Santa Cruz de Tenerife, for the first seven-day holiday cruise around the Canary Islands and Madeira.

Carnival Corporation guests who visit Tenerife can take advantage of a variety of popular shore excursions, including whale and dolphin watching, visiting the historic district of La Laguna – the only UNESCO World Heritage City in the Canary Islands – and exploring natural attractions such as the Gardens of La Orotava Valley, the Anaga Biosphere Reserve or the Mount El Teide in the National Park, home to Spain’s highest peak and the UNESCO World Heritage Site.

”We have a long history of working with Carnival Corporation and its cruise line brands,” said Clavijo. “We appreciate their strong commitment to our great port, city and the Canary Islands, and we are pleased about the new concession in the cruise terminal and the maiden call of AIDAnova, which is already establishing new ground as the first LNG ship. We appreciate the opportunity to work closely with Carnival Corporation and its leading cruise brands, including AIDA Cruises, and we look forward to growing this partnership further in the years to come.”

“The arrival of Carnival Corporation and its cruise lines to the port of Santa Cruz de Tenerife is the materialization of a momentous advancement to bring the city to the port,” said Suárez. “The tourist development of Santa Cruz will be possible during the next years thanks to the activity of her port. In this sense, thanks in part to Carnival Corporation ships, the cruise market generated an economic impact to the Port of Santa Cruz de Tenerife and the city of Santa Cruz of €24 million ($27.1 million) in the 2018 cruise season, an increase of €6m from the 2017 cruise season.”

Suárez continued: “The policy of environmental respect is one of our pillars and the arrival of next-generation ‘green’ cruise ships powered by liquefied natural gas (LNG) is among the priorities of our roadmap for the next years.”

Welcoming 617,987 cruise passengers in 2017, Santa Cruz de Tenerife is one of the busiest cruise ports in the Canary Islands, the seven-island Spanish archipelago off the coast of Africa and Spain, and the first to attract an investment by a major cruise company. The Port Authority of Santa Cruz de Tenerife, a Cruise Lines International Association (CLIA) member, is a very active member of MedCruise, the leading cruise port association worldwide, and it has been a Cruises Atlantic Islands founding member since 1994.

Seven brands from Carnival Corporation – AIDA Cruises, Costa Cruises, Cunard, Holland America Line, Princess Cruises, Seabourn and P&O Cruises UK – make port calls to Tenerife during the course of the year. Carnival Corporation expects to bring more than 300,000 passenger visits to the port in 2018 – half of all cruise passenger visits – with 130 calls by 31 different ships from the company’s cruise line brands.