“Blue North is dedicated to sustainable practices, and we spared no expense when it comes to the features we included on the F/V Blue North that reduce environmental impact,” said Kenny Downs, president and CEO at Blue North. “Not only are these practices more cost-effective, we believe that protecting our resources and environment is critical to the planet and the fishing industry.” 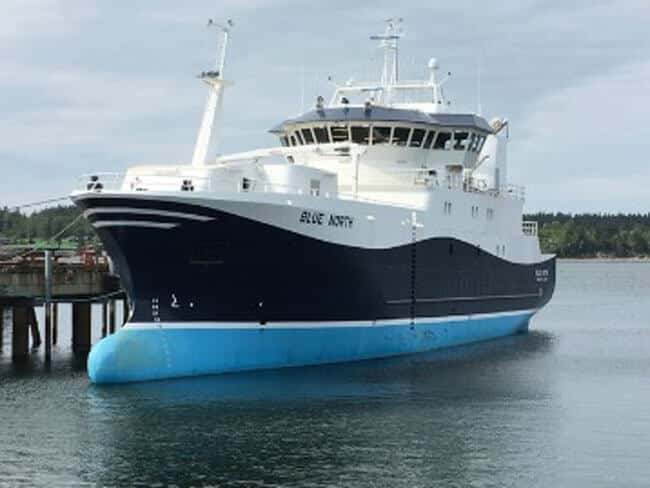 The Skipsteknisk ST 155L design uses a “moon pool” design for bringing the catch and longline gear back onboard, a first in the United States. Having an internal haul station means that the crew are no longer exposed to the rough seas, freezing temperatures, darkness and the risk of being swept overboard.

The vessel is built with a heavily weighted box keel design, to keep the ship’s centre of gravity low, and an anti-roll tank. This results in an extremely stable and comfortable working platform.

Blue North is powered by a diesel-electric propulsion system. Rather than using the diesel engines to power the drives mechanically, the Siemens BLUEDRIVE system uses two Caterpillar C32 engines and one Cat C18 driving diesel generators to generate power. The energy is used by the vessel’s electric propulsion motors and the bow thruster, as well as for fish processing equipment, freezers, lighting, hotel load, bridge electronics, and other systems.

Additionally, an engine-cooling and heat recovery system recycles the water used to cool the ship’s engines into potable water and at the same time captures heat. This hot water and heating cuts down significantly on the energy demand and means that waste water is not released back into the ocean. A smart grid detects electrical loads and monitors engine power, ensuring that the energy produced is optimally distributed.

The twin propeller dual-azimuth propulsion thrusters from Schottel offer the new vessel greatly increased manoeuvrability. Using the diesel-electric propulsion system in combination with the azimuth thrusters results in up to 30 percent fuel savings and an overall reduction in operating expenses.