Abu Dhabi Ports Company (ADPC) has won two awards at the Lloyd’s List Middle East and Indian Subcontinent Awards – the most important maritime industry event for the region – which took place recently at the JW Marriott Marquis in Dubai.

For the second year running, ADPC has won the “Port Operator Award” and, this year for the first time ever, has received the “Training Award”.

The judges commended ADPC for its strong commitment as a port operator to developing its cutting edge port infrastructure, to increasing its operational efficiency and to enhancing its comprehensive services to meet the needs of today’s and tomorrow’s customers.

“We are delighted to have been recognised for the second consecutive year as ‘Port Operator of the Year’ which acknowledges our success in establishing Abu Dhabi as a major international maritime hub. 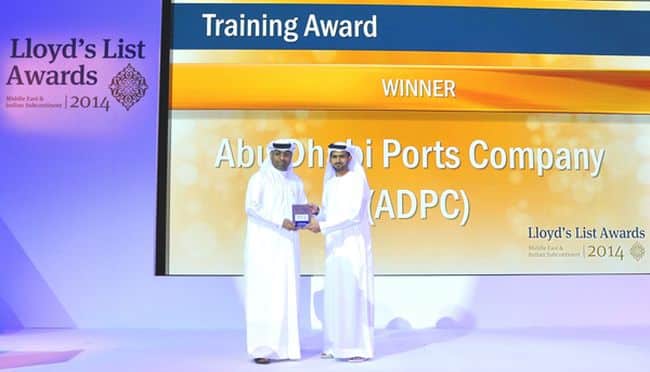 “Most recently, our flagship Khalifa Port reached the 2 million TEU benchmark after just two years of commercial operations and celebrated a record turnaround time for trucks which has dropped to 12 minutes, making the port’s container terminal the most efficient one in the region”, said Sultan Al Jaberi, VP – Regulations, Health, Safety and Environment (HSE) and Security, ADPC, who accepted the award on behalf of the company.

For the second award, the Lloyd’s List jury recognised ADPC’s achievements with regards to its training approach and offerings. The jury highlighted the fact that ADPC places training at the core of its successful organisation, providing a wide range of opportunities in line with international standards while driving the national goal of empowering Emirati talent.

“This ‘Training Award’ is a much valued accolade which confirms our focus on developing and retaining a strong, sustainable expert workforce for the local maritime industry. Our state-of-the-art and internationally accredited maritime training centre at Musaffah Port is developing talent in ADPC and across the GCC region”, Al Jaberi added.

The training centre, which complies with ISO quality standards, has been officially certified by Lloyd’s Register (LR) as an approved training provider. This accolade not only confirms the centre’s world-class status, but recognizes it globally as the very first in the GCC region to offer maritime training to this international standard.

Most modern facilities define ADPC’s maritime training centre which is equipped with manoeuvring and vessel traffic services (VTS) simulators, as well as a computer laboratory with classrooms and conference rooms. The numerous training programmes are taught by longtime practitioners and highly experienced maritime professionals.