You are here: Home › Shipping News › Action Not Platitudes Needed On Day Of The Seafarer: Synergy Group
TwitterFacebookLinkedInPinterestBuffer

Captain Rajesh Unni, Founder and CEO of Synergy Group, believes solutions are available to standardise and distribute vaccines, ensure seafarers get emergency medical treatment and better organise crew changes. The problem is a deficit of political leadership which is now so severe it is infringing the human rights of seafarers.

After a year of seafarer mistreatment by governments and ineffective lobbying on their behalf by the shipping industry, stronger action is now needed as the industry marks Day of the Seafarer 2021 on June 25, according to Captain Rajesh Unni, Founder and CEO of Synergy Group, which currently manages a diverse fleet of almost 400 vessels.

Captain Unni believes there are simple steps political leaders can take to uphold seafarer human rights and bring some order to the patchwork of Covid-related national rules that are now often making it difficult to ensure crews receive emergency treatment and vaccines. Indeed, many countries are now even banning the repatriation of the mortal remains of seafarers that pass away at sea, irrespective of cause of death or the Covid-19 status of those onboard the vessel.

“For over a year the shipping industry has been pleading for leadership from political leaders to help us find ways of running our businesses and treating seafarers with the respect they deserve,” said Captain Unni. “Another Day of the Seafarer is upon us and thus far our pleas have largely fallen on deaf ears.

“Just how little concern there is for shipping and seafarers was apparent with the tragic case of the Romanian captain of the Vantage Wave. The master tragically passed away on April 19 after suffering a suspected heart attack. There were no suspected Covid-19 complications. However, efforts to repatriate his body were thwarted by lockdown regulations at every turn.

“Human Rights at Sea reported that efforts were made to disembark the captain in a number of Asian countries, but permission could not be obtained. Almost two months later and the body was still on the ship and crew were facing food and water shortages at anchorage off China. This is not right.

“And this was not a one-off event. According to the International Transport Workers’ Federation, since March 2020 the bodies of at least 10 seafarers who died at sea have been held on ships and denied disembarkation to repatriate the remains, causing great additional grief for their friends and families. None of the seafarers died because of Covid-19.”

Throughout the Covid -19 pandemic, shipping has somehow managed to keep global trade arteries functioning, enabling countries around the world to receive the food, energy, PPE and vaccinations they need. The payback for keeping global supply chains open has been, with some notable exceptions, sparse, according to Captain Unni.

Currently, for example, finding the means of getting treatment for sick seafarers is often all but impossible, irrespective of any Covid-19 infections on board. “We have had several cases when Synergy-managed ships which have been made to wait for several days for emergency medical attention for crew,” he said.

“This is not humane by any standards of decency. Often vessels have had to sail a significant distance to find a port or country that will accept them for medical attention. These are the people, key workers, who are keeping nations fed and warm. They are supplying the parts and equipment that are facilitating economic rebounds. Yet when they get sick they are treated in this unconscionable manner.

“And that is before we even get to the difficulties of crew changeovers which has been a minefield of regulation and constant rule changes for over a year. Some ports are now asking for two negative PCR tests with a significant gap in between for all crew before getting clearance. We are also seeing cases where PCR tests for crew came out negative in the first instance our tuning positive in the second test, which essentially means that there are cases where ships are being immobilized for more than two weeks.”

Captain Unni believe vaccines should be the solution. But once more the failure to implement a global, universal system of rules and procedures is stymying efforts to bring order and planning. Instead, a series of national rules have made the situation far more complicated that it needs to be.

“Getting vaccinations for crew is extremely difficult because which ports will allow them ashore to get a jab? Not many is the answer,” said Captain Unni.

“How many countries which supply seafarers have vaccines they can spare for seafarers who are often relatively young and healthy – none!

“And how do we ensure they get the right vaccine? Not all the jabs that area available are recognised by individual countries or by the World Health Organisation, creating a patchwork of vaccination regulations where we need global clarity. The Covaxin vaccine, for example, accounts for a large proportion of the vaccines received in India where so many of our seafarers are from. However, this is not on the WHO safe list.”

Captain Unni believes there are simple solutions to some of these problems. “We need common standards for vaccines that are universally recognised with no delay,” he said. “We need the IMO to step up and work with the WHO on this.”

There is also a solution for the distribution of vaccines – empower port health officers to distribute them onboard ships. “Abu Dhabi is apparently offering free vaccines to tourists,” he said. “If that’s possible, then why can’t we give jabs to seafarers delivering essentials at key port hubs? Establishing vaccine port hubs is not an impossible challenge, but shipping needs more support to make this happen. This is not just for now because we need a global system in place because all these seafarers will eventually need boosters.” 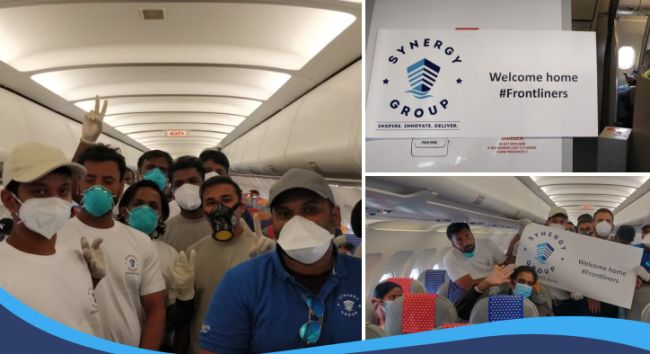 Above all else, Captain Unni would like to see more leadership from the world’s leading democracies. He welcomes the fact that 25 US states are now offering to vaccinate crew who deliver essential goods and services. “This will allow some 70 Synergy vessels calling at US ports to be vaccinated in the next three months,” he said. But that only accounts for around 10% of our total pool of seafarers.

“We urgently need more countries to follow the lead of the United States. We also need Flag States, port and terminal authorities around the world to prioritise non-native ship-crew in their national vaccination programs.”

A call for political action

With little in the way of firm action emerging to solve these issues from many parts of the world or from UN agencies, despite their best efforts in many cases, Captain Unni would like to see Europe and the US take a firmer lead on helping seafarers.

“These are the guys with the vaccines,” he said. “They could together use their political influence, economic power and control of global vaccines to ensure that jabs reach all seafarers around the world. Then they could make sure those vaccines are globally recognised. We just need politicians with conviction, who care, and this can work.

“We have seen clearly with the EU’s role on decarbonisation that things can change very quickly in shipping when world leaders are involved.

“They also have a responsibility to the people who deliver the cargoes on which they depend. I don’t see this leadership emerging from anywhere else, not when Covid has resulted in harsh lockdowns across the Asia Pacific that do not appear likely to be lifted any time soon.”

A failure to act will create long-term problems for shipping which could eventually negatively impact the trade on which so many countries depend.

“Already we are seeing that pandemic failures are making crew recruitment far more difficult,” said Captain Unni. “Crew are becoming more reluctant to return to sea because sometimes they do not know when they will be able to return to their families.

“How do we encourage parents to encourage their offspring that a life at sea is a good career choice when their treatment has been so poor this past year?”

“All of this was completely avoidable in the first place if seafarers had been treated as ‘key workers’ and given priority vaccination in their home countries, or in countries which may not supply seafarers but are heavily reliant on shipping and the services seafarers provide. If our political leaders are ever going to stand up for human rights and global trade, now is the time to do so.”